Guess What? He’s Finally Potty Trained! Here’s How We Pulled it Off

If you asked me a couple months ago if I thought my son would ever poop in the potty I’d get a dejected look on my face. Of course, I knew he’d eventually get it, but it felt like that day would never come.

He got peeing down pat easily. But he would run and hide ever time he had to poop. Of course it seems like the solution would be to watch him like a hawk and put him on the potty when that happened right? But he would flip out hysterically and cry, then just hold it until the next day when he could sneak away. 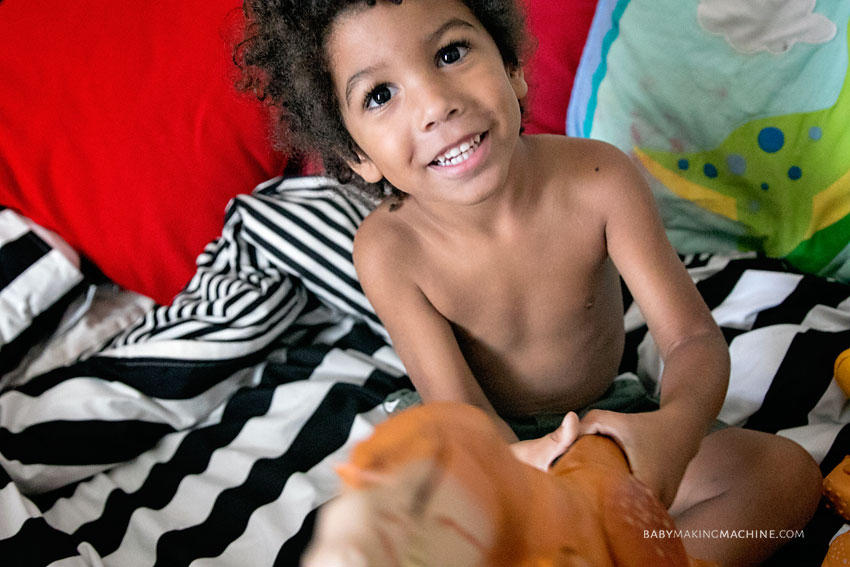 We tried bribery, and flipping the poop into the toilet once it was in his training pants. We even tried portable potties. I didn’t know if it was a privacy thing (hence him hiding). Or if it had to do with being afraid of the splash, or what.

I figured since he wasn’t holing his poop all of the time he wasn’t afraid of the act of pooping, just something about the toilet. I don’t know what was so frightening about pooping in the potty for him but after doing it just twice, he hated the idea of it.

I did a few posts asking for suggestions. One of the most common was to just strip him down and let him be naked. It seemed to work for a lot of you.

I suggested the idea to my husband but he wasn’t too keen on the idea.

But I had a theory that he wouldn’t.

We also stepped up our bribe game. I bought a toy from The Good Dinosaur series that Big T’d been eyeing on YouTube Kids. We didn’t take it out of the package and he could only hold it when he was sitting on the potty.

But he never went poop.

Since he was always pooping in his pull-up that must have been a comfort for him.

I stripped him down and suggested we keep watching him like we had been. When it came to be his usual time to poop he started running around and asking for his pull-up. I suggested he go on the potty. Before he didn’t want to because of fear, but now he’d become more comfortable sitting on the potty because of his new Ramsey toy. 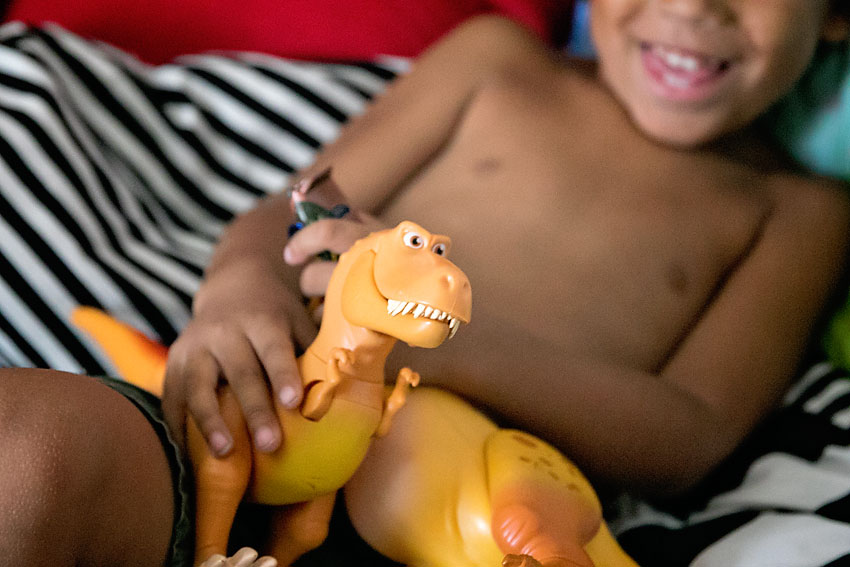 He still wasn’t comfortable enough to poop, but we were getting close (I think he’d been holding it for about 3 days at this point, which is a little concerning, but I figured he was near his breaking point).

See, we had gotten to this point a couple of times but by the time my husband got home a pull-up would go on and he’d sneak away to poop. But now, with my husband’s naked support, we were onto something.

Our son squirmed around for a while once he realized he had to go poop, like, for real, and eventually he ran into the bathroom by himself and a few minutes later called out.

We cheered and praised and celebrated over the top. And of course he finally got to open his Ramsey toy. 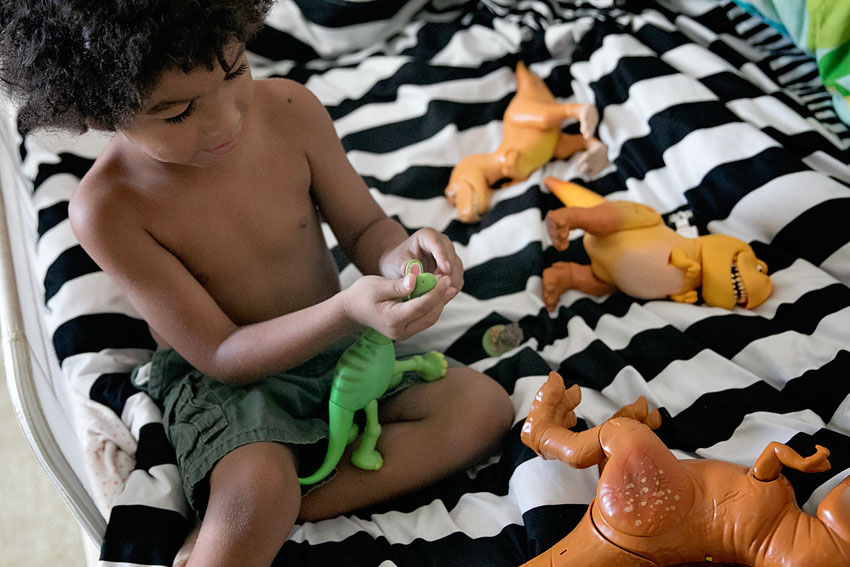 Now my husband was a believer. The next few days it was more of the same thing. We got a couple more toys to bribe him with including a Nash dinosaur from the same movie, ordered from Europe.

Since that first celebration though, he hasn’t had any more accidents and he’s been in underwear all day. It feels almost unbelievable considering how I felt like we’d never get to this point.

What we’re still working on

As far as I’m concerned the kid is potty trained. I’m ecstatic and feel like we are so close to being done with the baby stage. Which is bittersweet, but at the moment feeling mostly sweet.

We haven’t totally ditched the pull-ups though, or gotten rid of the diaper pails. We’re still working on night training. Sometimes he’ll wake up and tell me he needs to go and I’ll take him to the bathroom. Other times he won’t wake up at all (and I actually don’t mind that one bit). Then some days he wakes up totally dry. I don’t see any rhyme or reason to the pattern right now, but I’m not stressed about it.

We have a Diaper Genie Expressions pail that holds the wet pull-ups until trash day, and locks in the odor so it can easily last all week. It’s easier to open and much cleaner than the previous versions we were using. 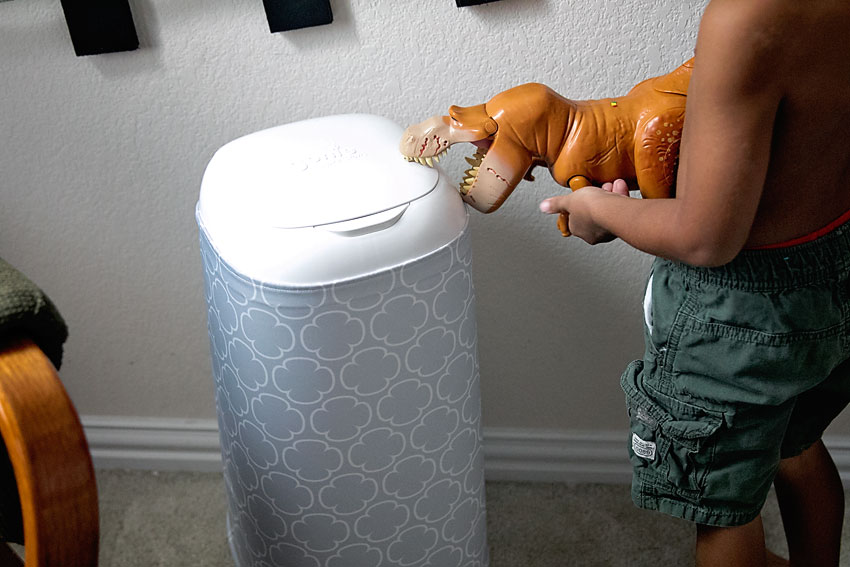 His nursery has been remade into a train room and I’m slowly making my way around the room changing decorations out. Diaper Genie Expressions fabric covers are a new fun accessory sold separately you can buy to go on them to style your diaper pail to match your child’s nursery (or toddler) room. Right now we’re using the grey clovers fabric, but it would be pretty kick-butt if they came out with some rail-road designs. There’s also pink and blue and other designs to choose from to match your style. Something I definitely would have loved in Lil’ J’s whimsical pink nursery.

We’re also still working on him pulling his pants and underwear up my himself. For some reason this doesn’t come easily to him, but every day he gets a little better and I’m not stressed about it cause hey… At least he’s finally potty trained!

Did you have a challenging kid to potty train? Did this method work for you?

I enjoy celebrating the little (and big) wins in life, ranging from those finishing touches on my child’s room, to celebrating big potty training wins! That’s why I partnered with Playtex Baby on this post. All opinions (and typos) are my own. A big thanks to Playtex Baby for sponsoring this post.

My son is a couple months older than Big T, though he’s been potty trained for quite a while, possibly even a year. He was super-resistant early on, but daycare wore him down, I think, and then he was on board totally, no issues with #1 or #2. His accidents have been pretty minimal, too, all things considered. Only a couple poop ones, thank goodness. The pee ones happen more often, but I think that’s more because he’s distracted and doesn’t get there in time, or has issues getting his pants down, or takes too long wanting to be a big boy on the big potty. We have the frog potty on the floor that he uses most of the time, but we also have a Cars-themed seat for the toilet and sometimes he insists using that, and it takes a bit to set up the seat and stool. But anyway, he also still has a lot of trouble pulling up his pants. He can do it (most of the time–jeans are tough) but usually the undies are sticking out, or waistbands are folded under, or his shirt is half tucked in, or everything is twisted. He tries, but I usually have to fix something 🙂 He’s also not night trained. His brother wasn’t until he was six (UGH), but the weird thing is that prior to switching him to a big boy bed earlier in the summer, he was dry probably 5 nights per week. But after we switched him, something must have changed in his sleeping pattern, because we rarely have a dry night right now. There really isn’t much you can do until the brain and the bladder figure things out, but obviously continue to remind him to get up and go when he remembers. I cringe when I have to buy more pull-ups, particularly since I thought we were almost done, but I’m just resigning myself to it for now!

Omg yay!!!!! Congrats on the milestone!!! We are still working on my daughter being fully trained. Only thing that works for us is unfortunately bribing!

My son also had trouble with going number 2 in the potty. We tried everything without any success.He then spent a weekend with my dad who he adored and he came home and told us big men poop in the pot. Who knew.

Keep up with your work! I guess I’m lucky that when my son pee or poop by himself when he needs it after training for a few times. When finishing, he will call me to help him clean up!

I enjoyed your article!! Starting to potty train my boy/girl twins. They turned 2 in August…. Lord help me ?

You may be surprised when hearing that I trained my kids to pee and poop just a few weeks from birth and now everything goes smoothy.

Congrats! My boy had potty train just about a week. And now, he trains his little brother.

I have twins (boy/girl), and my husband was a stay-at-home dad who really didn’t mind changing diapers. Since potty-training always seemed a struggle, I decided I wasn’t going to worry about it, and their pediatrician seemed to think that they’d be potty-trained by the time they started kindergarten, so why worry? And my mother told me that if they’d had disposable diapers when my sister and I were born (1958, and 1960), then she wouldn’t have potty-trained us until much later. WELL – now that I had the two voices of authority that seemed to matter to me the most (my mother and the doctor), then I felt fine with my decision. The twins were anxious to follow their older sister to school, and they started pre-school a month before their 4th birthday, and they were required to be potty-trained before starting pre-school. I told them they couldn’t go if they weren’t potty-trained So, the week before school started, they got potty-trained, and everyone was happy! (They will be 16 next month).

Hahaha, that’s so awesome. What a great incentive! I’m glad it worked!

This information is really great. It is going to help me a lot to train my daughter. Thanks a lot for sharing.

Potty training was possibly one of the most frustrating aspects of parenting with our first child because we had too high of expectations for her. With our second, we were much more laid back and decided to guide her on her own schedule and with less pressure on her and less stress on us, it made a huge difference in our success. Our first child would regress quite a bit when we traveled due to routine changes but waiting a little longer with our second worked really well. Each child is so different so perhaps it was just the difference between their personalities. Your insights are super appreciated and I will send this to my sister whom is having her first child this summer.