It’s been a busy week. It’s dance recital season, and this being my first one I’m asking myself how in the world families do this year after year plus competitions!

I found a little strength to edit the pictures that Lil’ J and I took last month when she asked if she could be Rapunzel. I bought a few bags of $3 wavy hair extensions and they matched perfectly! I probably could have put more in to make the braid much thicker but it was so long and heavy that it’s probably good that I didn’t. We found the Rapunzel dress at the Disney store on clearance.

Lil’ J helped me put together silk flowers to go in her hair, and then she placed them in her braid. She was a little disappointed that I didn’t give her “yellow” hair (though now she knows it’s called blonde) but she was happy when she started to whip it around. 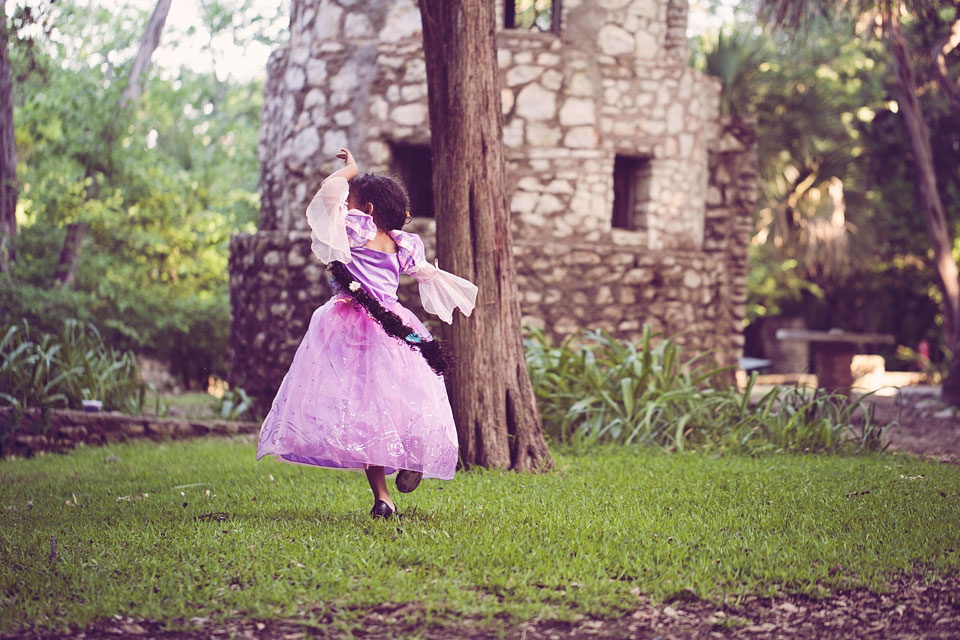 When Lil’ J told me she needed a frying pan for these pictures I ordered a cast-iron skillet on Amazon. It was SO heavy, so we just brought one of our own regular frying pans. Even at a fraction of the weight, it ended up being pretty heavy for her. But she had fun with it. 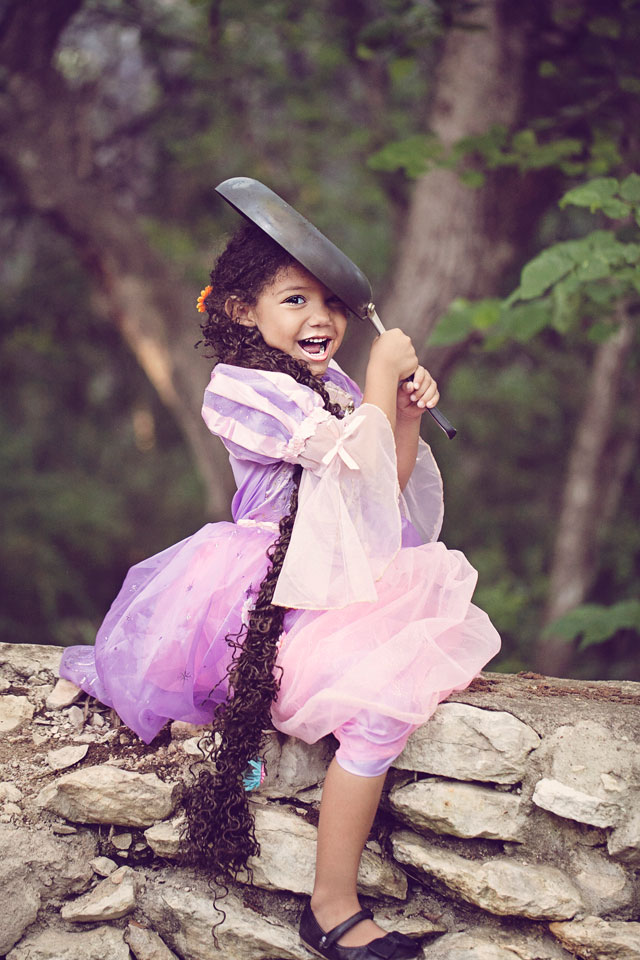 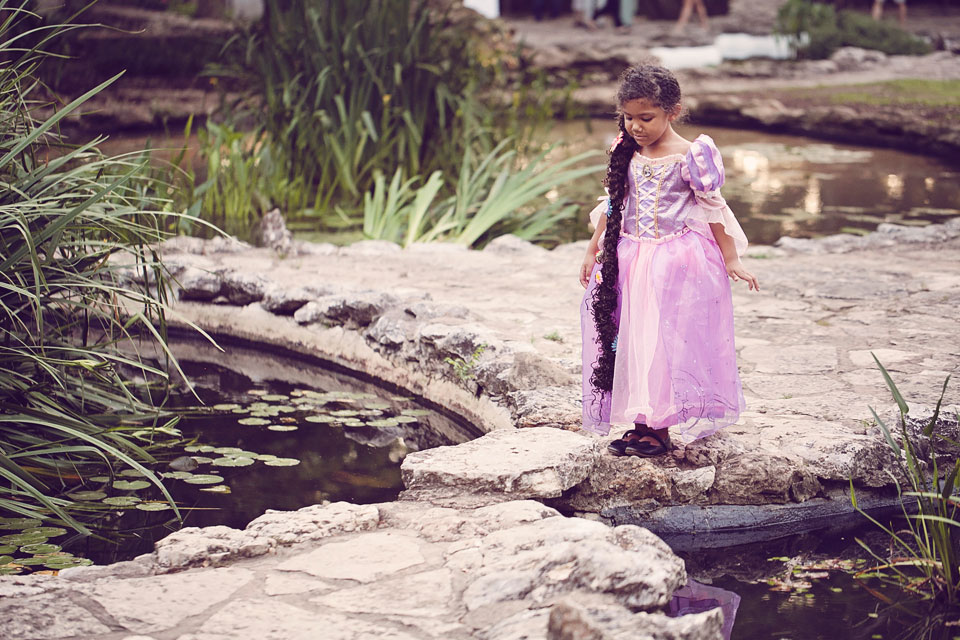 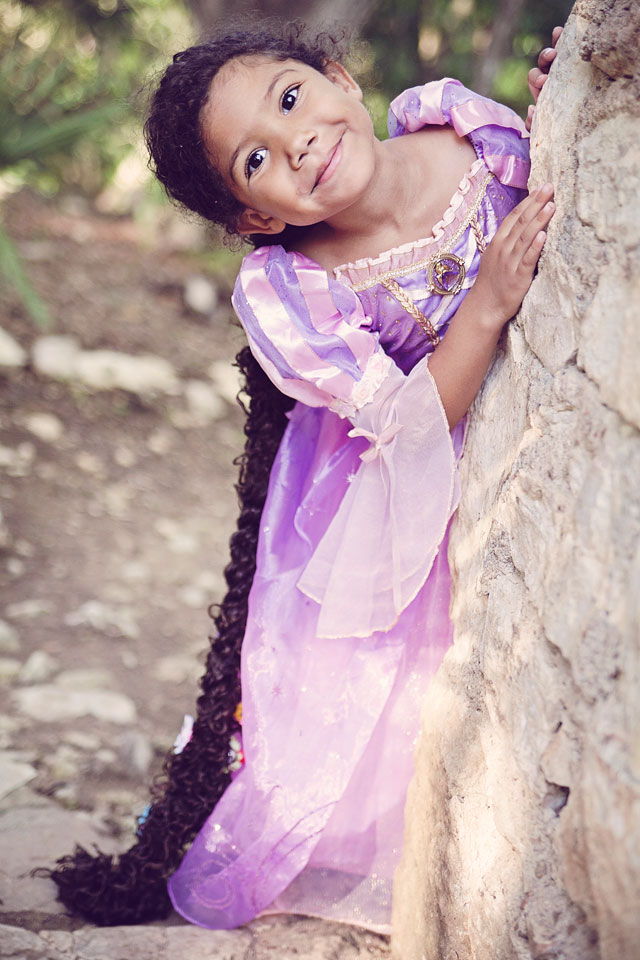 This was probably our hardest shoot to date because she didn’t give me as much direction as she normally does. We drove to North Austin to Mayfield Park where there’s a cute little “tower.” A wedding was just finishing up so we were trying to be discreet and she had just woken up from a quick nap on the ride up there.

It took her a little while to warm up and become her usually bubbly self again and tell me the kind of pictures she wanted, but once she did, it was golden. 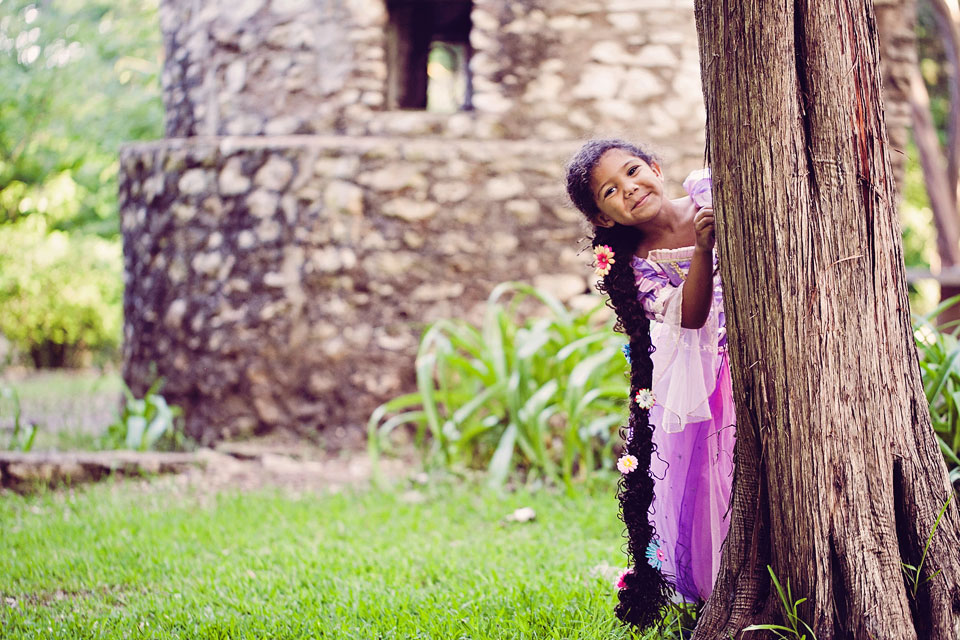 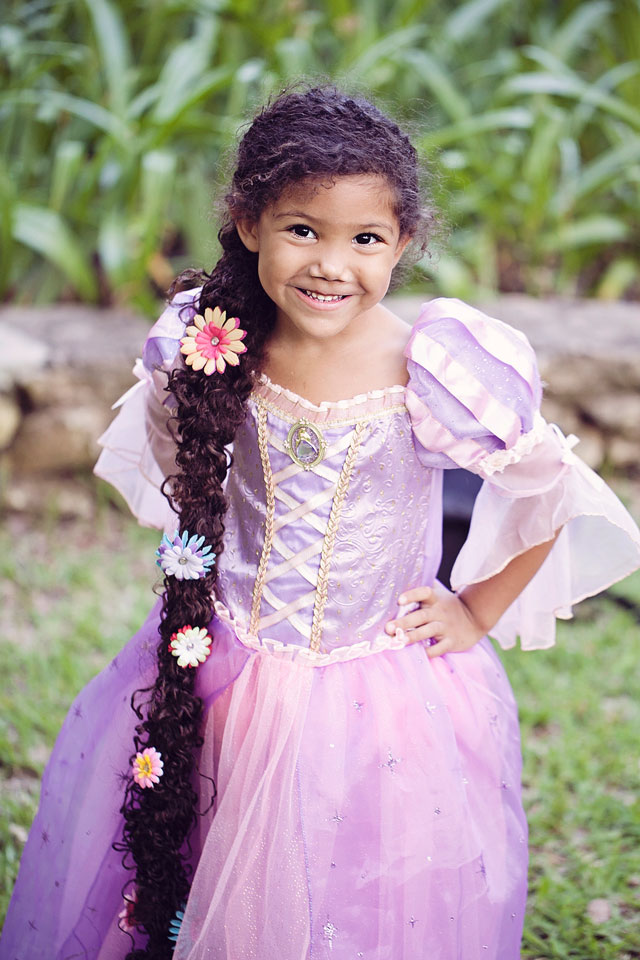 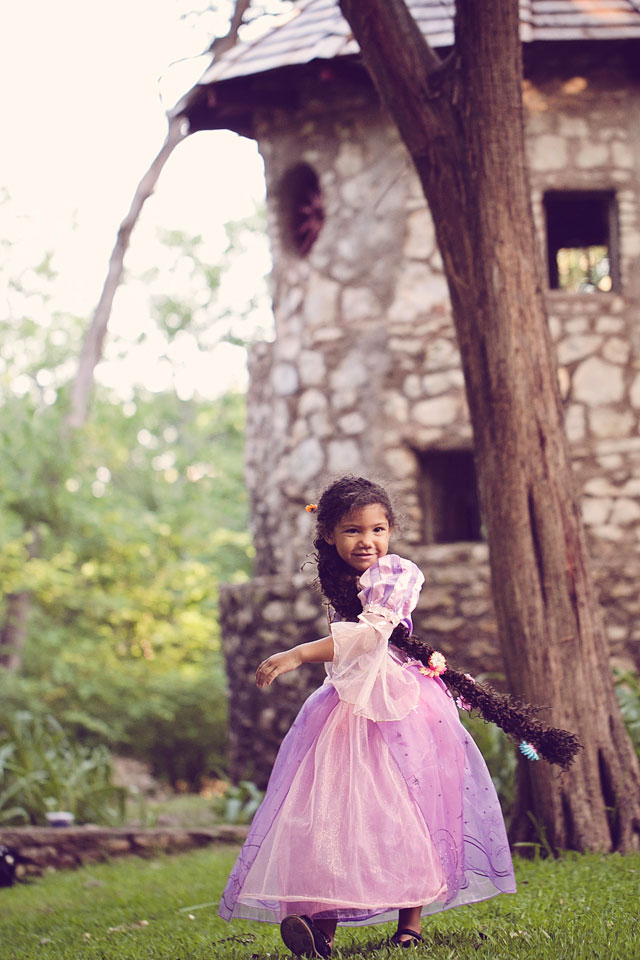 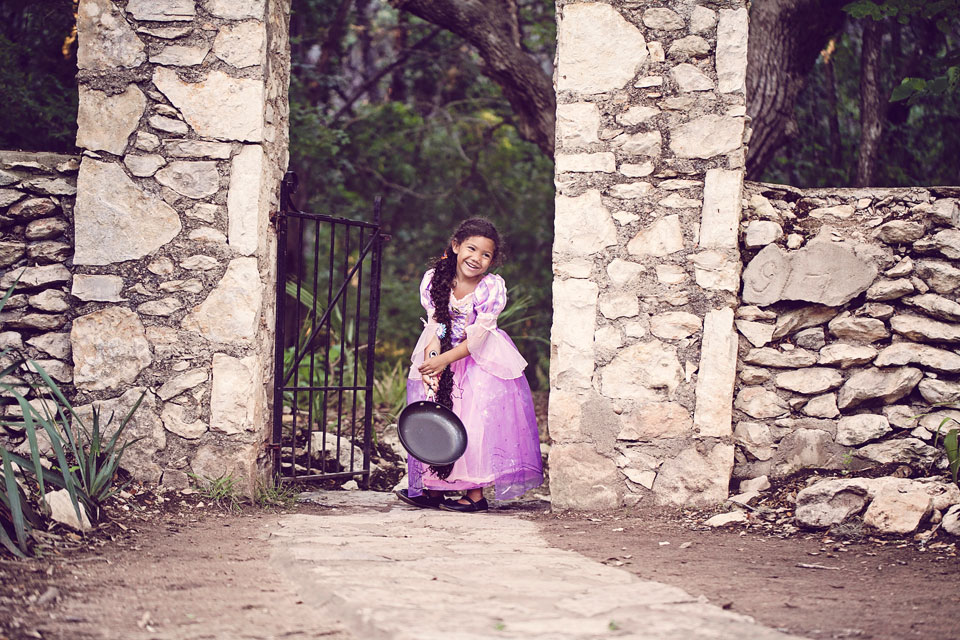 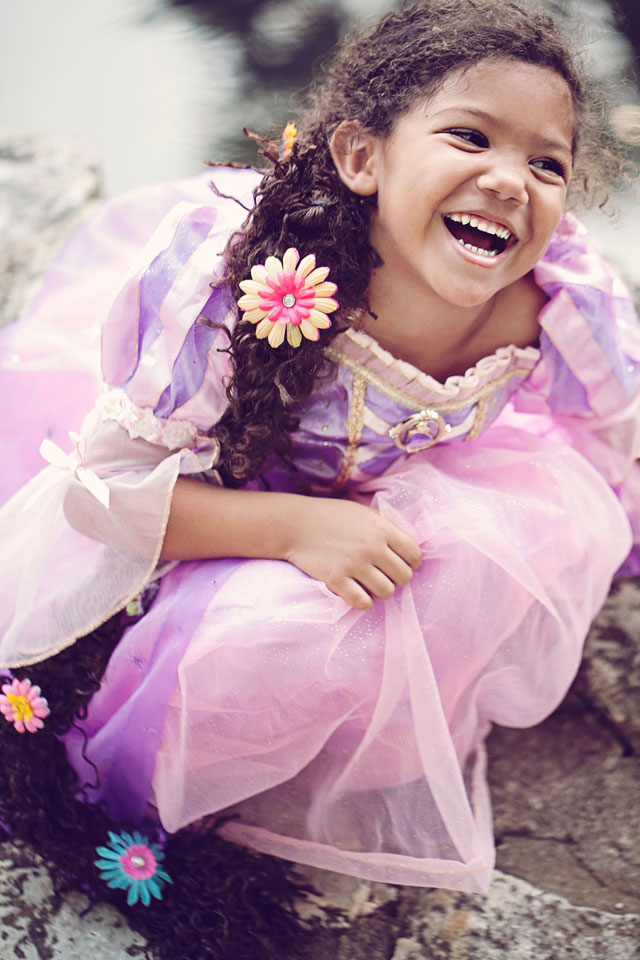 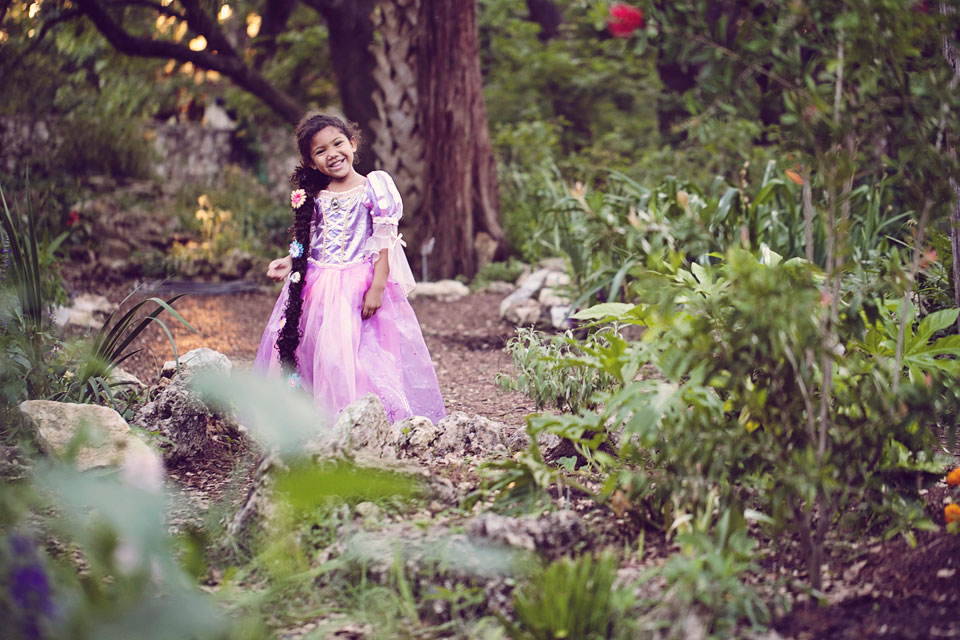 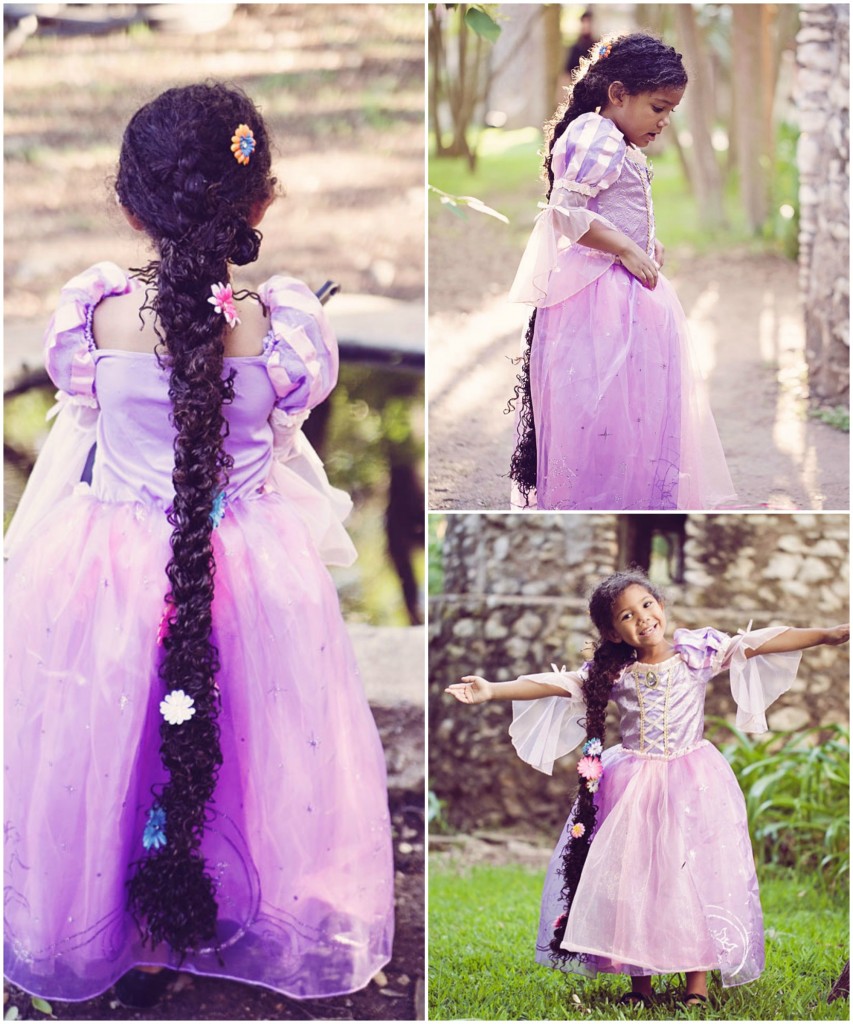 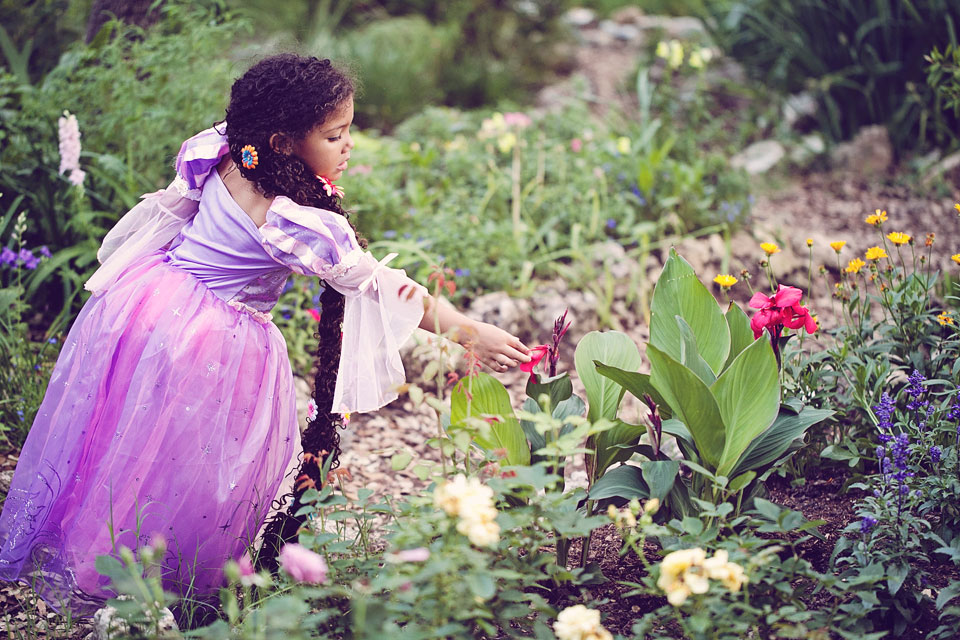 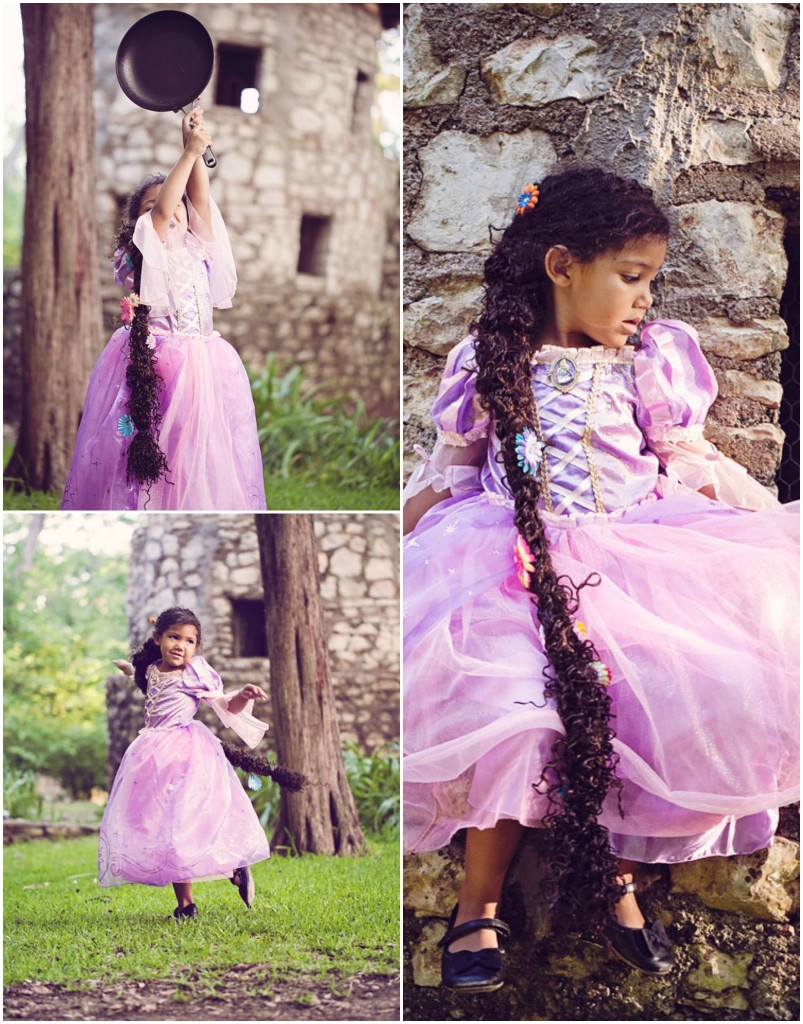 I loved that there were so many scenes here. If it wasn’t such a drive I’d love to do another shoot there. Lil’ J wants to do Tiana, and the beautiful little pond with lily pads is so cute, but I’m thinking we’ll go explore this summer and find a place near home that could be better.

It’s hard choosing a favorite from this shoot, but I’d probably go with the first one. You can’t even see her face but I love the way her cute little spin just captures her youth, her imagination, and joy. I love this girl so much. My little princess. 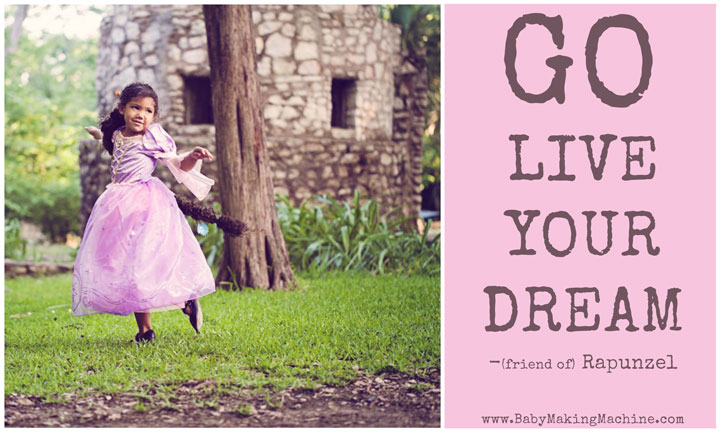 In case you missed it here are her other My Little Princess Disney Photo Series: Mulan, Merida, Snow White, Cinderella.

Which photo is your favorite? 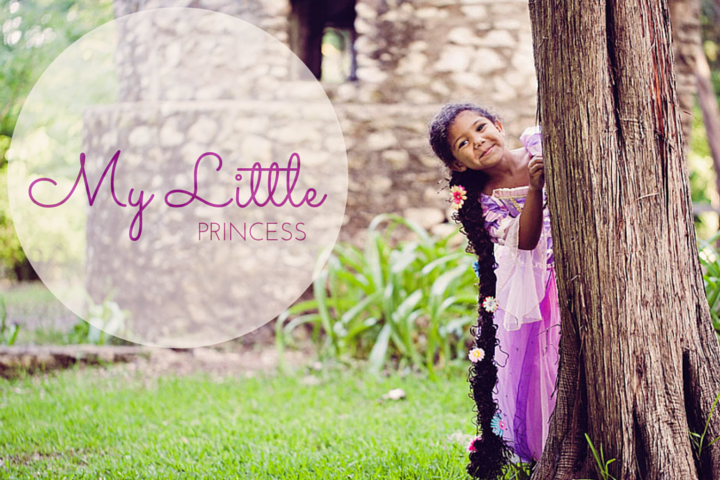 You my friend are incredibly talented. I don’t think I could pick a favorite but I am scouring your blog and You Tube channel now for photography tips. I am in awe of your story telling ability from your photos, videos, writing and beyond. Simply stunning!

PS – when my baby was 2 weeks old my 2 year old at the time was obsessed with Rapunzel, she got a plastic frying pan and hit the baby over the head. Sigh.

A plastic frying pan woulds been perfect for this! haha.

Kristen thanks for your sweet comment, you’re the best! I’m hoping to post more photography tips soon so stay tuned for that 😉

They all are absolutely amazing and your daughter is beyond beautiful! I’d have to say my favorite would be the one of her peeking out from behind the tree with the “tower” in the background. It just oozes with curiosity and youthful innocents. You do a wonderful job documenting your family and all the stages of life you go through together. I have only recently come across your blog but I love everything you are doing with it! For quite a while now I have wanted to start a blog but have been to afraid to commit to it! Your blog is definitely one that inspires me and makes me want to commit! I don’t have children just yet but when I do I want to record our life’s journey just like you do! You are one amazing women & mommy!

Awww Tiayonna, your comment made my day. Yes!! A blog is a great way to document life, I say do it! I’m hoping to write a tutorial post soon about starting a blog and my recommendations, so stay tuned 🙂

This is a neat idea for Halloween. I’ll have to remember it. Our princess likes Rapunzel too. 🙂

Oh yea!! I think getting some hair to braid in make it look more realistic, and it’s fun. It’s Halloween all the time around here, yesterday she told me for Halloween she wants to be herself. haha.

Lil’ J was quite the beautiful little Rapunzel! My favorite shot is the one where she’s standing in the gate opening with the frying pan. Can’t wait to see Tiana.

I love that one too!

I’m excited for Tiana as well, her new dress is a couple sizes too big, but I’m hoping it doesn’t stop us. haha

You’re daughter is absolutely beautiful! Her spirit just shines through! Looking at these pictures put a huge smile on my face. I love all the photos! She should be modeling or acting, she is such a natural.

Thank you Kim! She has a lot of personality, that’s for sure. haha. She brightens my day.

Oh my goodness girl, how could I even pick a favorite?? I DEFINITELY need to get over to this park and take some pics. She is so adorable!! I love the first one, and I love the one of her peeking out from behind the tree. So cute!!! I think I need a girl. ;o)

I adore this entire set. I refuse to pick a favorite. She’s beautiful!

You’re so sweet Brandy. Thank you! 🙂

The pictures of her with the frying pan are my favorite!

haha, those were my favorites too! Well… it was hard to pick a favorite for me, but she was having so much fun with that frying pan!

Another great photo shoot! I love, love, love all of these!