A fierce Mulan you don’t want to mess with: My Little Princess

My daughter has always loved playing dress-up. Maybe it has to do with the fact that I changed her multiple times a day when she was an infant. Frills, tulle and glitter don’t bother this girl and she has no problem living in her dress-up clothes. But don’t let this frilly dress fool you. This princess is FIERCE. 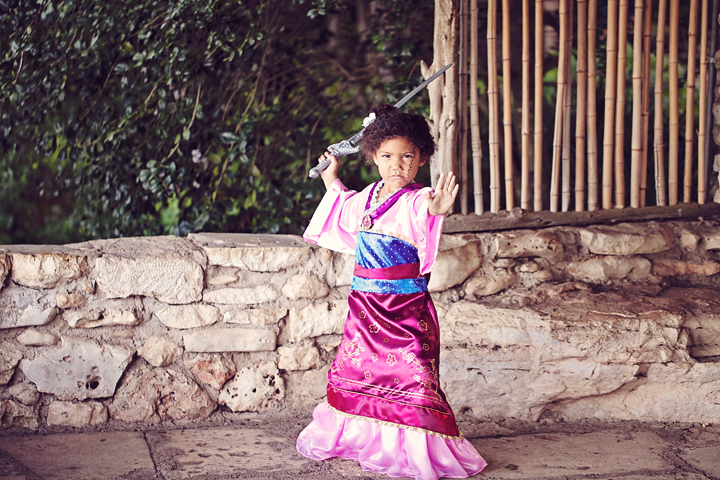 She’s loved seeing the pictures I’ve taken of her acting out the princesses and a few weeks she told me she wanted to do Mulan next. We got her dress on clearance at the Disney store. Here are similar Mulan Dresses. 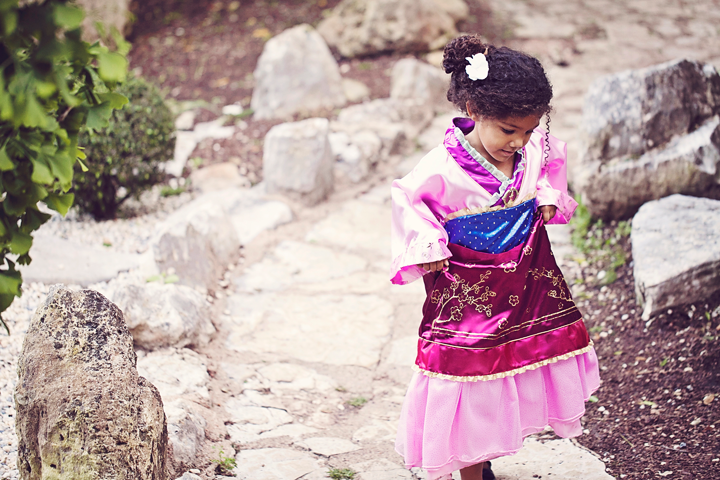 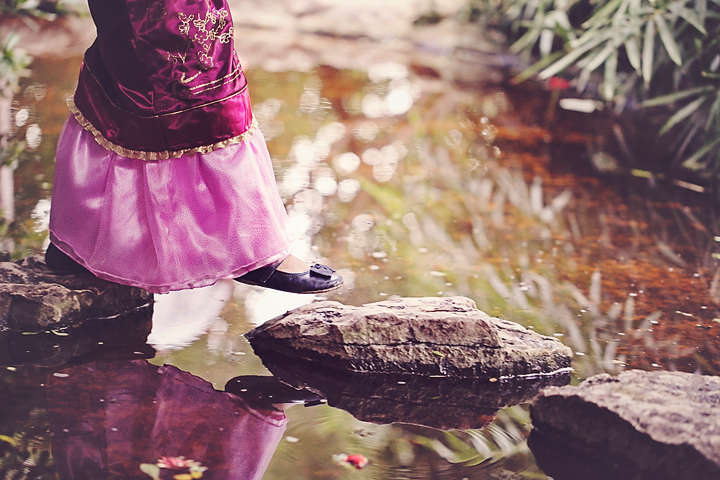 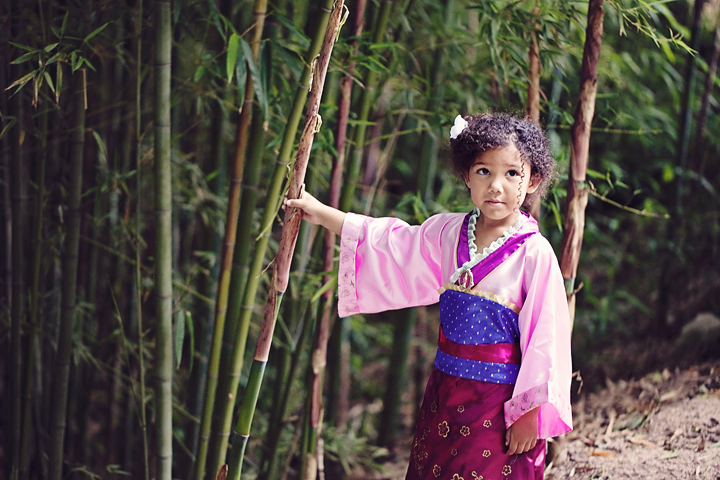 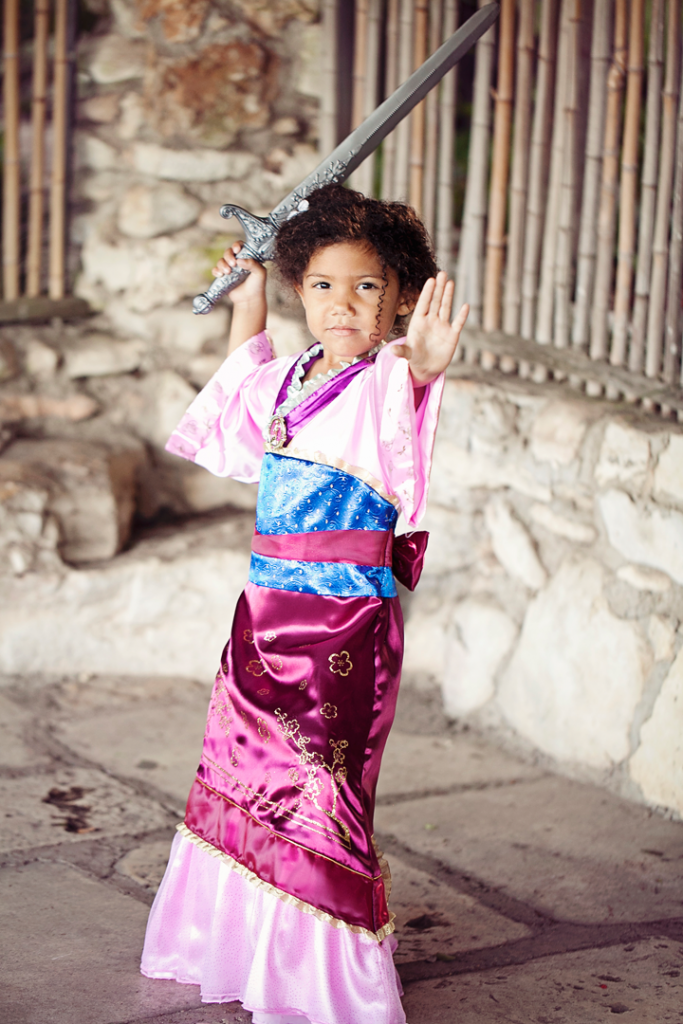 I was so excited about this one because Mulan is one of my favorites. We went to the Oriental Gardens at Zilker Botanical Gardens in Austin which was a gorgeous backdrop for these photos.

Before we left the house to take pictures she told me how she wanted her hair, and after a couple of tries I got it right (sorta). 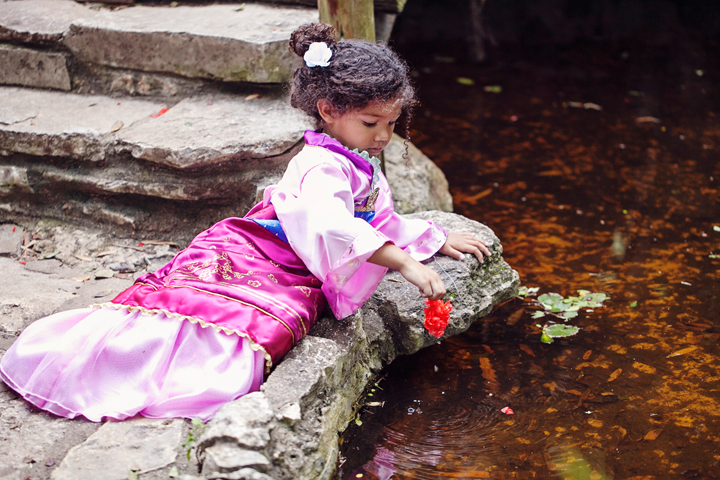 Lil’ J wants me to sew her Mulan’s regular green kimono or her warrior uniform but I just haven’t had the time or patience to figure it out yet. So she settled for Mulan’s signature “princess” dress and told me she wanted a sword for the pictures. We borrowed one from a friend and I thought it made for a great combination.

As we walked around my daughter directed me where to go and what she wanted to do for the pictures. 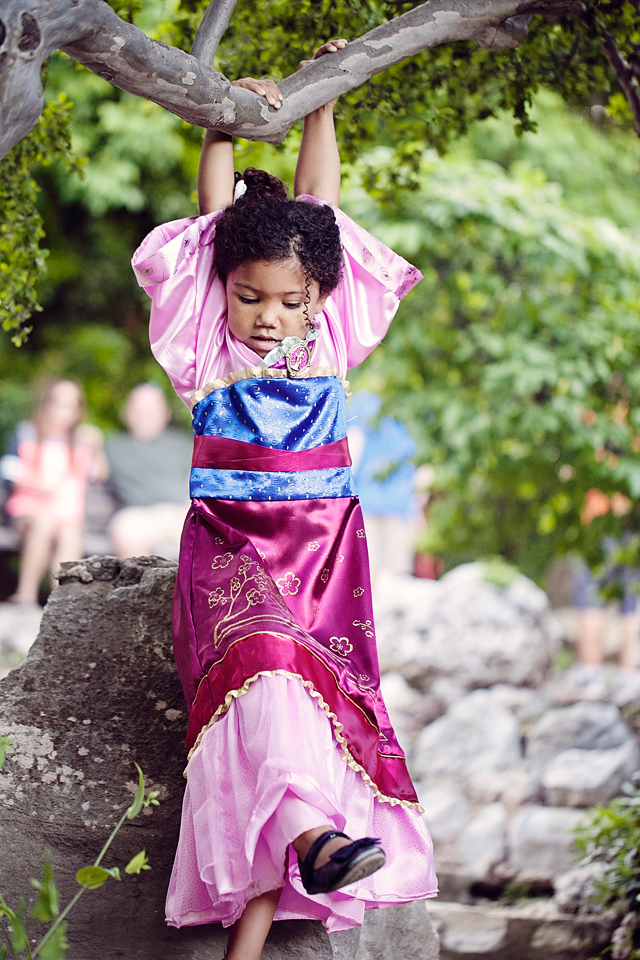 She hung from a tree (probably not allowed). And pretended to climb another because: “Remember when she climbed the pole mom?” 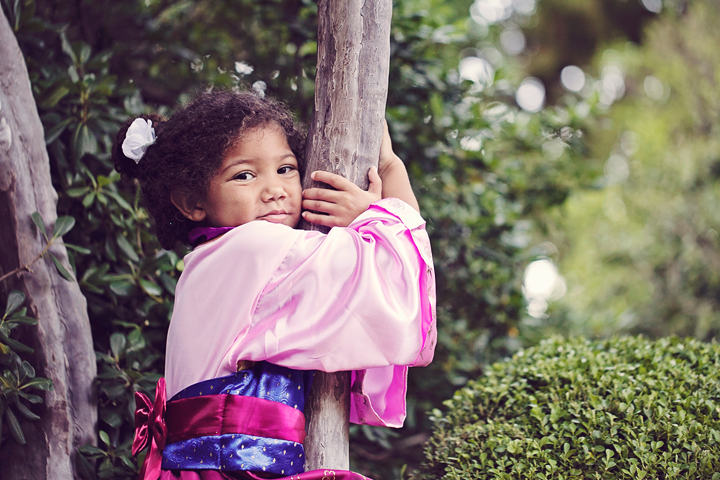 She wielded the sword like a pro and stayed in character. 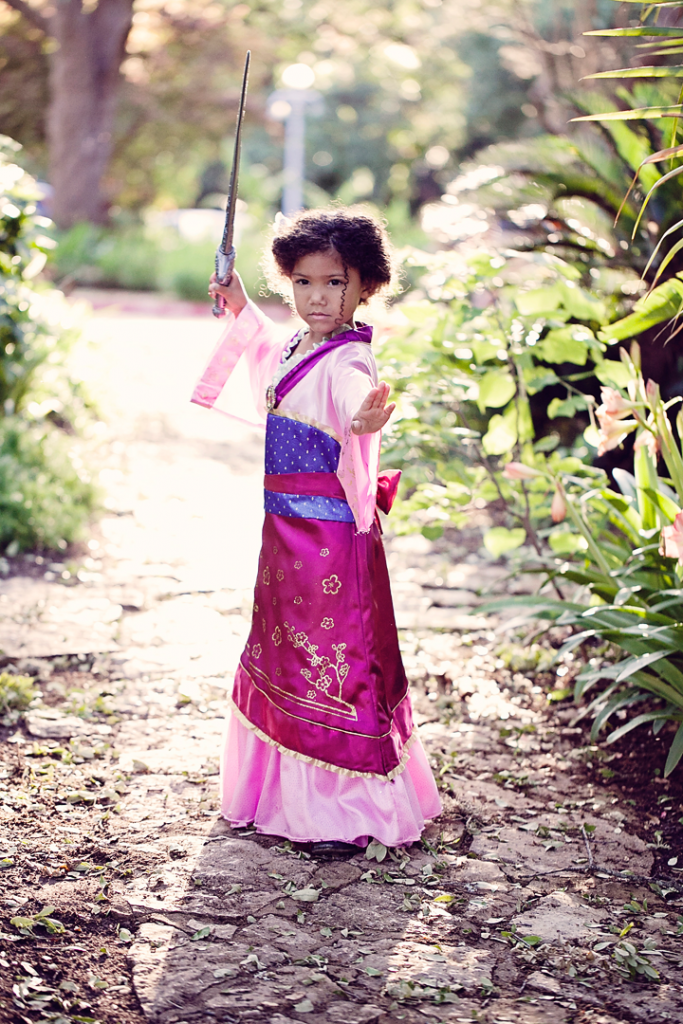 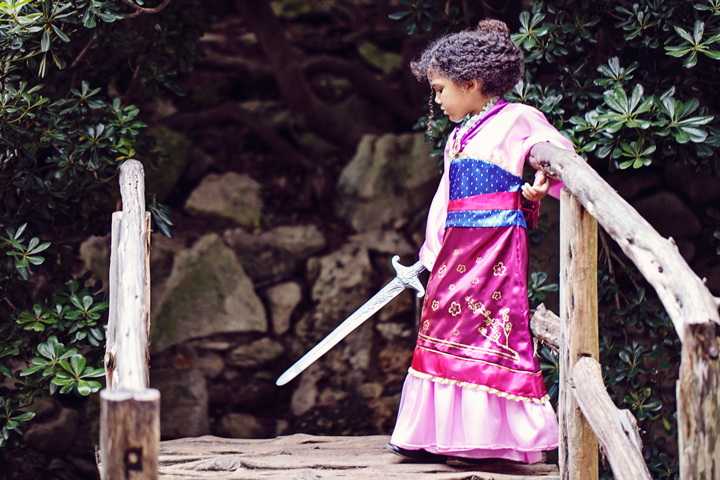 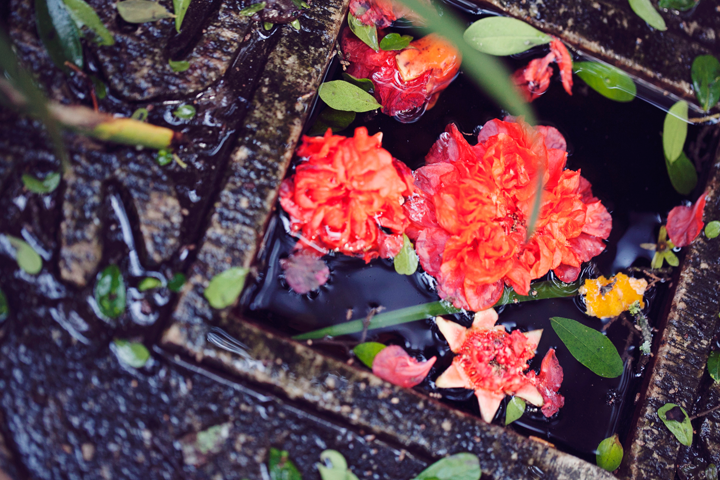 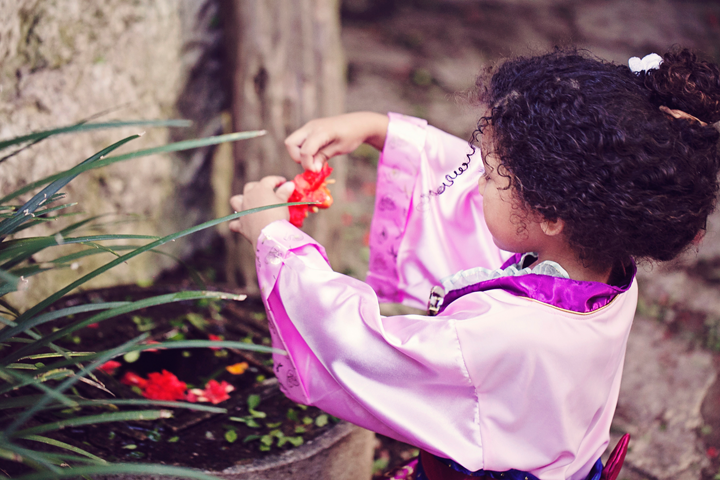 There were a couple moments when I caught her her off guard just laughing and being herself, and those are some of my favorites. 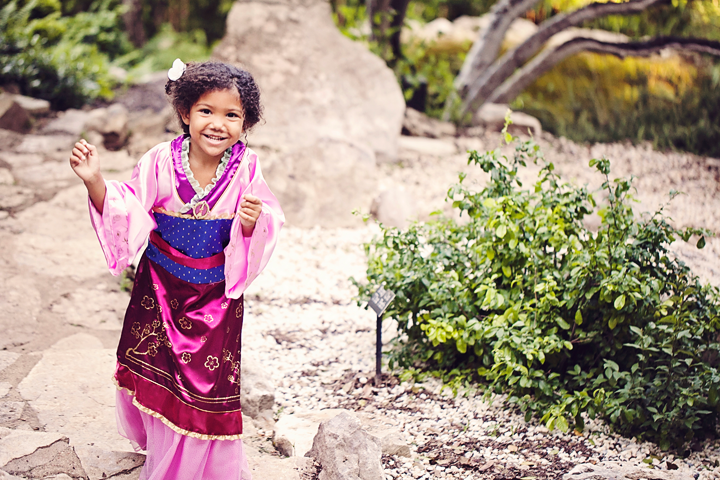 We did Rapunzel a few days later, I’ll edit and share those within the next couple of weeks. I’m not sure who we’ll do next but there’s talk of her wanting to do Tiana, or Cinderella again in her wedding dress (that we like to call a birthday dress for obvious reasons). FYI, the Disney Store is having a 40% off costume sale right now. We usually get Lil’ J’s costumes used or on clearance from the Disney Store. I’m eyeing Jasmine since the one we have right now is a little small, and a couple items for Big T.

The Emperor’s quote from the movie is the most popular in the movie, but Lil’ J and I both like the sword one, and it also stuck out as one of the funniest parts of the movie. 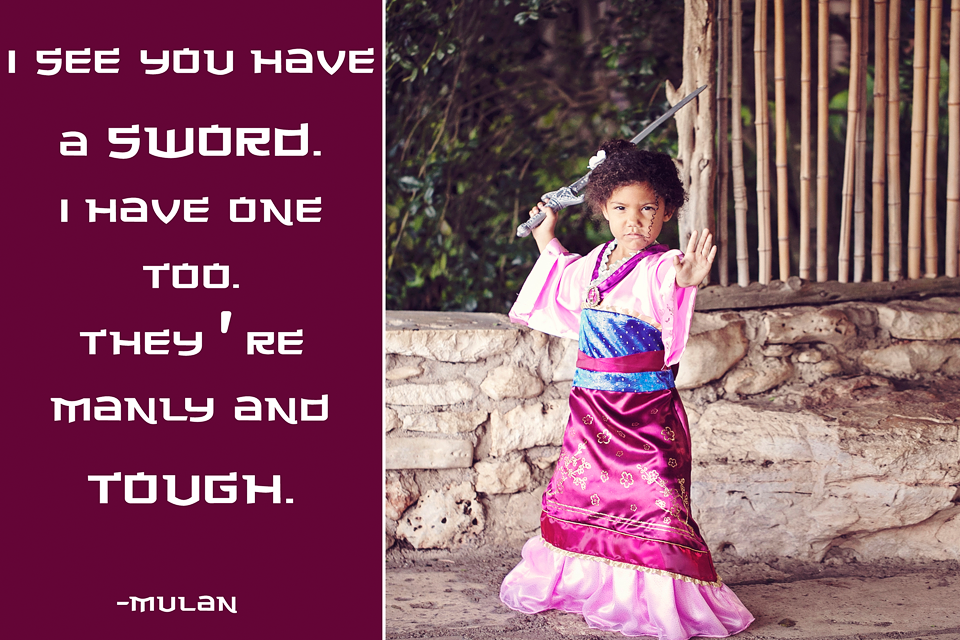 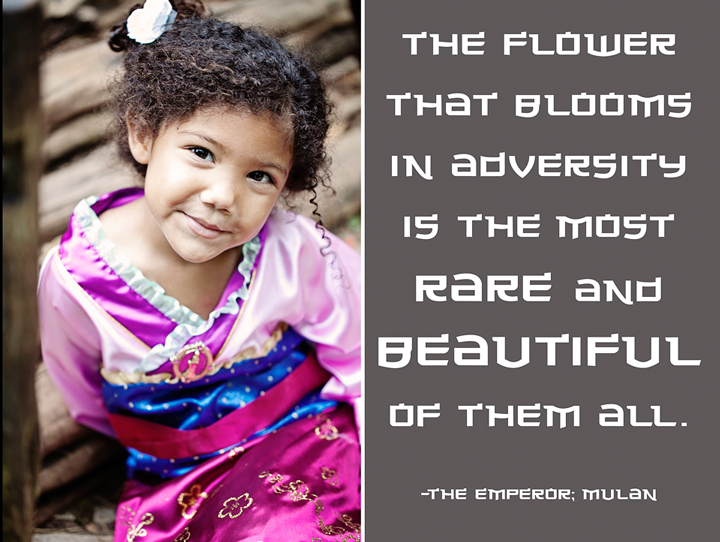 Which picture is your favorite? Do your kids like to play dress-up?

Here are the other Disney Princesses she’s been so far:
Cinderella
Merida
Snow White

I think this Mulan shoot is probably my favorite so far! My kids love dressing up. It’s the first thing Moo wants to do every day after she’s had her after school snack.

Thanks Elizabeth! It’s definitely my favorite so far. She was so into it and it was such a great location. It’ll definitely be hard to top.

I think Moo and Lil’ J would have SO MUCH fun together!

Gorgeous pics! My fave is the one with the sword where she is ready to attack. My daughters don’t play dress up just yet but I am looking forward to it ☺

Thanks Peta! That is one of my favorites too. I love how committed she is to the character haha.

Oh get ready, you’re in for a fun ride (and possibly an addiction!)

Can I just follow you around and watch you take pictures or better yet can you offer a class!

These are absolutely ADORABLE!

Mulan is among my son’s favorites. He likes that she fights right along with the male soldiers!

I think this one is my favorite! She really looks adorable and believable 🙂 I sent this one to my friend because it reminded me of her & her daughter. I can’t wait to see the next one.

So cute! I really like the picture next to the flower quote. 🙂

How adorable are these pictures!! Well done mamma!

Thank you so much Sonia!

Your daughter makes an adorable Mulan! Mine is currently obsessed with Repunzel from tangled. I think it would be fun to do something similar to this photo shoot of yours for her!