9 Weeks Pregnant and Getting Fatter!

I swear I get bigger as the day goes on. Last night I was getting undressed and caught a glimpse of myself in the mirror and GASPED! …No lie, then I grabbed my stomach.

My iPhone ap said this would happen. The “What to Expect” one. It said this week I should take off my shirt, take a deep breath and look in the mirror! I know a lot of people don’t start taking belly pictures until 12 weeks or so but I’m glad I have been. Even with my shirt on you can tell a difference in these pictures. Maybe it’s because I was so small to begin with. Or maybe I was just REALLY bloated last night, I dunno.

I ran downstairs to show my husband.

“I’ve totally got a fat stomach now!” I told him.
“Really, have you been eating a l– WOAH!” And he grabbed it. See, even he notices! 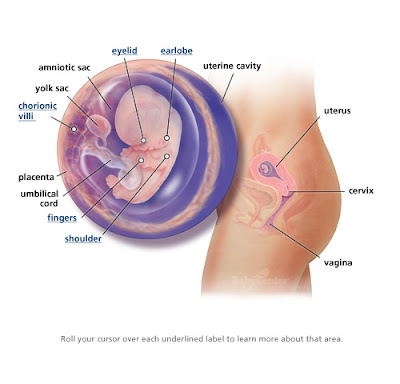 Here are the changes that happened with Spawnie during my 9th week according to Baby Center:
– Finally starting to look more and more human.
– Spawnie’s essential body parts are accounted for, though they’ll go through plenty of fine-tuning in the coming months.
– Spawnie’s heart finishes dividing into four chambers, and the valves start to form as do tiny teeth.
– The embryonic “tail” is completely gone.
– My baby’s organs, muscles, and nerves are kicking into gear.
– The external sex organs are there (Woohoo!) but won’t be distinguishable as male or female for another few weeks.
– Eyes are fully formed, but Spawnie’s eyelids are fused shut and won’t open until 27 weeks.
– Spawnie has tiny earlobes, and mouth, nose, and nostrils are more distinct.
– The placenta is developed enough now to take over most of the critical job of producing hormones and now Spawnie will start gaining a lot of weight.

Going on with me:
– Physically I’m getting bigger
-My nausea is getting worse though I still haven’t vomited
– I’m still going through a lot of mood swings though I’m trying to control them better
-I’m ALWAYS craving potatoes:
There were several times this week that I ordered a baked potato along with french fries, then baked more of my own french fries when I came home. Then I bought potato skins… Oh and hash browns. I LOVE potatoes. Always have, but apparently Spawnie does too, which I’m happy about.

I went for a checkup last Tuesday and we didn’t get to hear the heartbeat but we saw our baby again. Spawnie was much bigger and the heart was too! Next time, in December we’ll get to hear it. My little person didn’t want to move for us… I guess it was sleeping. I’m thinking of drinking a Dr. Pepper before the next ultrasound to see if I can get baby to move more. I can’t wait to feel the kicking!! 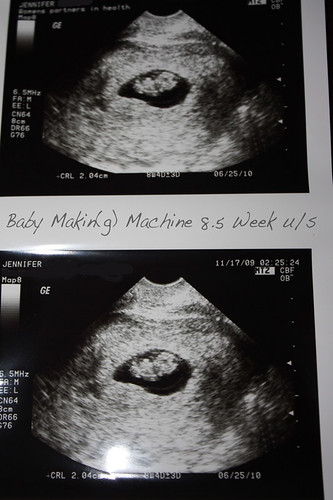 I’m so happy because this week, although I have to work on Thanksgiving, I have 4 days off! So I’ll be catching up on a lot of rest, and getting Christmas decorations ready to put up. I’ve NEVER been in a hurry to put up Christmas stuff. In fact, I’m usually annoyed by people who skip Thanksgiving… That’s me this year. A few people told me it’s nesting, but I didn’t think that happened so early.

I’m also still tired all of the time. When I get a break from work I enjoy lounging around and watching TV. Speaking of TV… Tuesday at 10:30am EST I’ll have my 2nd MomTV show and I’ll be answering your questions from my ask me anything post, and answering any other questions from the chatroom live!

And now… The must awaited photo.. You won’t believe your eyes! Were you this big at 9 weeks? I will say… In the morning it’s not as big, I think because I sleep on my stomach and back a lot and it flattens it out. By night time I look like this! 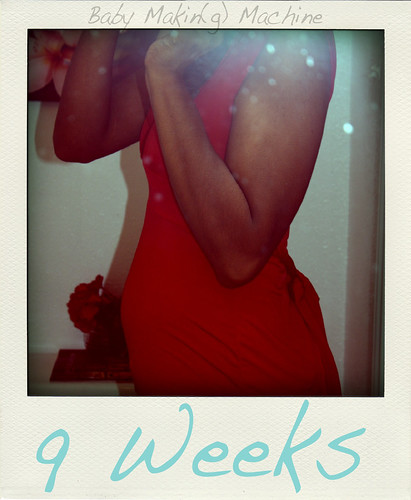 PS: I forgot to add! At my last dr’s appointment I had gained one pound (in 2 weeks) so I think I’m on track?!

WOW!! I can’t even begin to describe how jealous I am…

Add about 2 inches to your belly and that was me at 37 weeks. It’s just not fair!!

You look absolutely adorable tho!!

Part of your stomach being flatter in the morning is due to bloat–you naturally bloat up as the day goes on. Even at 20 weeks, I’d be bigger in the evening. You look great!

Like you, I look more pregnant at night than I do in the morning and I think its due to bloating, the amount of food and water you drink throughout the day.

Hopefully the icky feeling you have will go away soon. Mine lasted about 16 weeks when most people say it lasts around 12 weeks. Every pregnancy is different and so exciting!!!

What iPhone app do you have that tells you what you should be expecting? I didn’t buy the book what to expect when you are expecting because I figured it’s pretty much a given. LOL With so much information available online who needs books right?!

Once again, congrats on the pregnancy and enjoy this time! Don’t you feel sooo sexy!?

I also think it’s because you were teeny tiny to begin with. I hope this happens for me…well not THIS early (don’t want to even tell people until 12+ weeks) but I am fairly small so I hope I pop out like this 🙂 So beautiful you are! Hang in there, only a few more weeks of that tummy upset (hopefully) and you’ll be able and ready to chow down for Christmas!

Look at that baby bump!!! When I was 7 months, I still had people that didn’t realize I was pregnant! Of course, I was wearing hoodies most of the time, and that hid a lot. But still….seriously!

You look wonderful! Yay for the little baby belly!

WOW! i totally expected you to be over exaggerating. LOL! I love it! So exciting!

that is a happy little baby!

I dont wanna rain on your parade but it could mostly be bloat, since your uterus is or should still be below your pelvic bone. I’m 14 weeks 4 days and still not showing, just occasionally look pregnant when i’m bloated. I think it also depends on your abs and how tight they are.

who knows though really! yay!

How fun! You definitely have a bump going on. 🙂

You look adorable!
I miss my torpedo!

Congrats on the pregnancy, how exciting!! It is just wonderful!!

It’s probably more bloat But i really don’t know lol I didn’t “show” till about 7 months 🙁 I was so jealous of all the preggo bellys and even at 9 months I looked 5, lol.

Yea Jenn! I can’t believe you’re already showing and then again I can ;o) I love that you’re already taking belly pictures. I didn’t think to do that with my first baby and then I forgot with my second. I soooo wish I would have though. It would be so fun to look back on…

You are too cute! I love the bump! And I’d opt for orange juice, babies love to dance with orange juice and plus, its got great vitamins. 🙂

Baby Bump! Yay!! I looked like that at that point with my 2nd and 3rd babies. With my first, I didn’t pop until I hit 4 months. On the day I hit exactly 4 months, he made his presence in my uterus known. That was the day I stopped wearing jeans about broke out the maternity shorts.

Your bump is so cute!

yay baby belly! Congrats yet again, & btw, I read that Belly Laughs, & it was great. She’s funny as all get-out!

and remember–it’s not FAT, it’s BABY (bloating or not, heh)!

It’s all in your head! LOL! Seriously, baby bumps are the only time that having a stomach pooch cute…so milk it! ;-p

Oh this makes my heart so happy! Thank you for taking us on this journey with you 🙂

You have such a precious baby bump!!! I think you are showing already because you were so tiny! Spawnie has nowhere else to go but OUT! Looking good on ya, ma!

Awwwww, look at your lil’bump. That is so cute. Thanks for sharing. That time of life seems ages ago for me LOL. Enjoy every moment of it.

You are right on track and doing great. I am now almost at my 12 weeks mark, the morning sickness has gotten a little better (im also just getting over 2 weeks of a really bad flu), I’ve gained 7lbs, my energy is slowly returning, and I look huge. lol. Yay for you. Keep writing and keep us posted. Hope you feel better as you near that 12 week mark.

Try orange juice before your next ultrasound. That has always gotten my babies moving (this one included).

You look great! Congratulations on your MomTV show. Have a wonderful Thanksgiving.

If you plan to stop by, just let us know, a rough headcount would be helpful. And please feel free to pass it on to other Austin (and nearby) bloggers, blog readers, and tweeters!

Any Qs, please ask, we’d love to see you there.

Hi there. I’m in Texas too pregnant with my first! I’m a little further along (about 3 weeks), but I’m sure we’ll be going through the same things… I added myself to your email list & twitter. Look forward to seeing our similarities!

Oh my goodness!! lol, your bump is so cute.

My bump is far bigger this week, though this is my third time around, so the muscles are stretched [can you tell I’m saying this for my benefit not yours LOL?].

Be grateful you haven’t vomited…that’s all I do.

These swivels allow the rig to roll in the dips fishing rod values and holes more readily.
You go tto a special fishing rod values store to
purchase them. Threading line through rod guides, tying knots, handling fish and every other angling function is easier with the
fingerless gloves. The Corbett National Park is a
lot of bass clubs where you can leave all your trials and tribulations at home
or the office and just enjoy the simple pleasures.