5 Questions to Ask Before Taking Your Family to See The Good Dinosaur: A 5-year-old’s Review

If you’re thinking of taking your family to see The Good Dinosaur over Thanksgiving weekend there are a few things you should be aware of first.

Lil’ J and I had the chance to screen it Monday night before it’s officially in theaters everywhere on the 25th. Here’s more info on advanced movie screenings in case you ever want to try to make one of these!

First of all I feel like I need to introduce you to this movie because it hasn’t been nearly as publicized as Pixar’s Inside Out was earlier this year. I’m telling you that merchandise, the previews, the promotions. It was SO hyped up. And I totally bought into it. 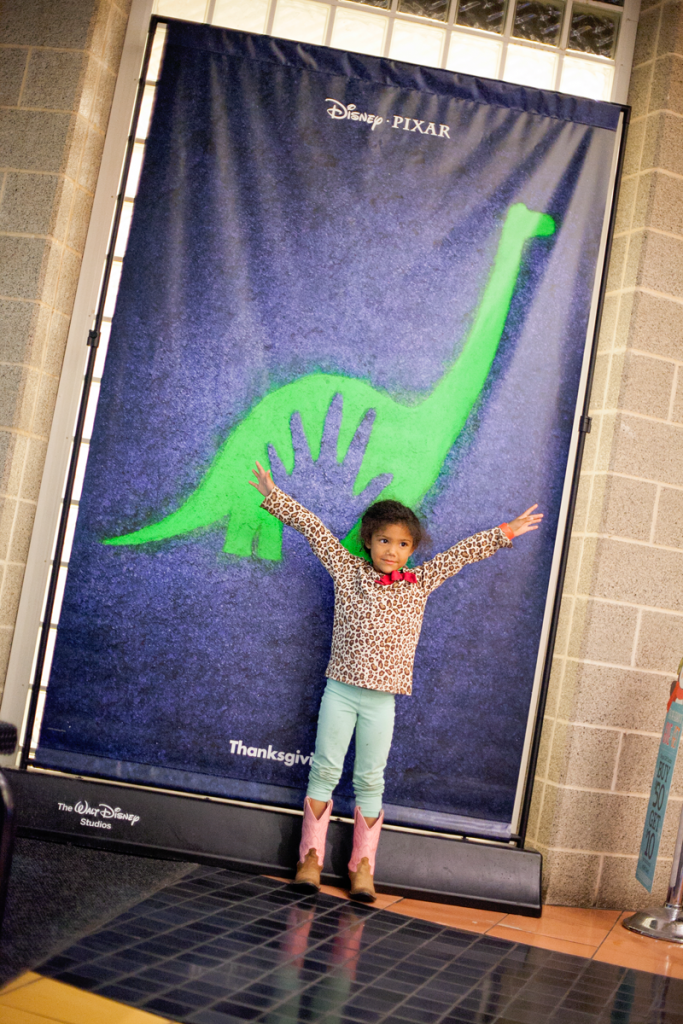 This movie, on the other hand, I feel like many have hardly heard a peep. I keep my eye on all of the Disney Animation and Pixar films but I worried since Disney seemingly wasn’t spending as much effort promoting this film, that it was going to be a big letdown.

Even the local screening was set for RIGHT before the movie release, versus a week or two before, and I only saw one listed when normally there are at least two, sometimes more. All of these signals to me screamed potential flop.

I didn’t watch the extended trailer. I felt like that was a mistake I made before Inside Out. I’d seen most of the good parts before hitting the theater. What little I did watch before this movie made me think there would be more dinosaurs and more people than we saw.

Lil’ J and I went into this mostly unaware of what to expect. But it was still great! 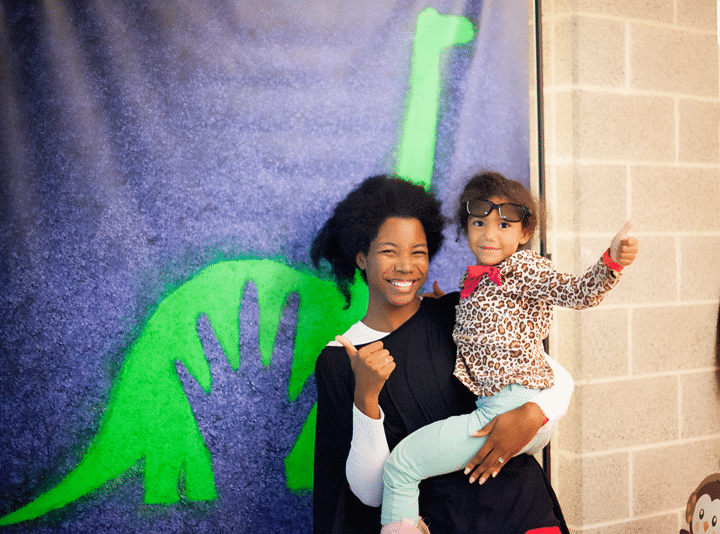 Coming out, I have some questions you should ask yourself in case you’re debating whether or not to take your family.

1. Do you like dinosaurs? If yes, then it’s a no brainer, you must see this movie. It’s lightyears better than the 2000 Disney animated movie ‘Dinosaur’ (which would most definitely be in my top 5 LEAST favorite Disney animated movies). Although the animals looked more realistic in Dinosaur, The Good Dinosaur is much more cuddly, and it should still be appealing to young dinosaur enthusiasts, and definitely not frightening to those who typically have dinosaur aversions. So if your answer is no, there’s a really good chance you’ll still like this movie.

2. Do you like cowboys? Cowboys? I thought this movie was about dinosaurs! Yes, well, if your answer is yes, I have a feeling you will LOVE this movie. Or at least Pixar’s attempt to give some of the characters a wild west flavor.

3. Have you gone to the bathroom recently? You’ll definitely want to make sure you have before sitting down to watch this movie. For one, you don’t want to have to get up and miss any part of this movie! It held my 5-year-old daughter’s attention longer than any movie on the first-run through. I didn’t see her get bored at all (this is rare). And secondly, you are going to laugh so hard you may pee your pants. Seriously, I can’t remember the last time I laughed that much in a movie. The best part was my daughter was laughing too! In true Pixar fashion there was plenty of humor for the adults as well as the kids.

4. Do you or your kids startle easily? This movie is pretty intense. There were SEVERAL times I kept saying “ouch!” Maybe it was the fact that we saw it in 3D, and that the images felt so real, but I was literally gasping and clutching at parts. You know your kids best, if they’re extremely sensitive, or startle easily, you may want to watch it first. The scariest part of the whole movie experience for Lil’ J was the short film that aired before The Good Dinosaur. Edited to add (SPOILER skip to #5 if you want to be surprised): There is death involved (not a huge surprise) but some kids could find this really sad, or scary).

5. Does it take much to make you cry? Happy tears, sad tears, you may want a tissue for both. This shouldn’t be much of a surprise when it comes to Disney/ Pixar.

Lil’ J and I just did our top 5 Pixar Picks a few weeks ago. She now claims The Good Dinosaur takes the top spot from Monsters Inc and pushes UP out of her top 5.

It’s always hard for me to try to rank a film after seeing it just once. I have to try it on over and over a few times to see if it still feels good. But as of now I’d say it’s definitely up there, probably knocking Finding Nemo out of my #4 spot.

Speaking of which… Like Finding Nemo, the animation quality of The Good Dinosaur was amazing. Something that–looking back now–I feel like Inside Out was missing a bit of.

All this to say, I feel like this movie was greatly underrated in it’s pre-release stage, and I hope it does well over Thanksgiving weekend. We enjoyed it so much we’re going to see it again tonight with grandma for opening night.

Alright, enough of my opinion. Here’s what Lil’ J has to say. 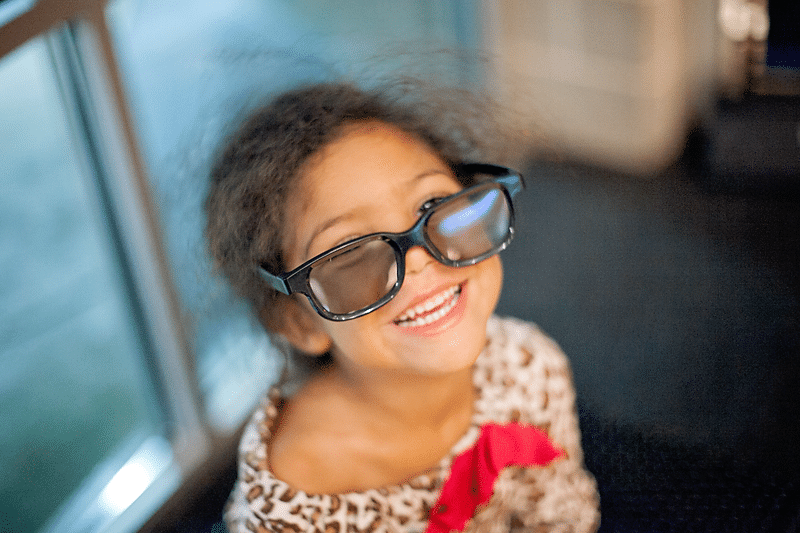 The Good Dinosaur: A 5-year-old’s review:

Q: What did you think of The Good Dinosaur?
A: It’s one of my new favorite Pixar movies because it’s funny, and a rock star movie.
Q: What does a rock star movie mean?
A: That it’s so cool.
Q: Should kids who are afraid of dinosaurs see this movie?
A: Yes, because it’s a nice dinosaur and he won’t scare them.
Q: Advice for people going to see it?
A: When you try a movie you get to decide if you like it or not, and I like this movie.

Will you be going to see The Good Dinosaur this weekend? Or what did you think?

Love her reviews! I actually really do want to see this one, and I’m very much an adult without children. 🙂

Haha, it’s definitely great for adults too. There were a few jokes that parents got that the kids just didn’t understand the same way. haha

I was already excited about this movie but now I can’t wait!

Yay! Be sure to come back and let us know what you think!

I had a slightly darker view of this movie. I so agree about parts that make you cringe. But the other parts of this movie was so awesome. Wish they had more of those.

Another friend told me this today too!! Her daughter is 4. How old is yours? The villains were a little scarier than they were in some other Pixar films, but since they weren’t big and scary I guess they didn’t bother me as much. You’re right, the good parts were really good.

nice review. i also don’t like to see trailer as it exposes the suspension! i just cant wait to see the movie as i have a lot of curiosity of this creature!

I’m thinking about taking my 2 1/2 year old son to see this movie as his first ever movie experience. I’m just worried about him being afraid since he’s never watched anything even remotely scary before and is starting to get a fear of the dark. I’m sure its no where nearly as bad as people are making it out to be but I’d like your opinion. Should I take him to see it?