There’ve been so many names I’ve called you through this journey but soon I’ll get to see your little face and call you by your real name.

Everyone always talks about how amazing it is to see your baby for the first time. I guess it’s one of those things you can’t imagine until it happens. It’s hard to picture what it will be like meeting you. Will I feel like I know you? What will I think of you? What will you think of me?

It’s funny but I keep jokingly telling people “I hope she’s cute,” I know you will be but it’s just so strange having no idea what you look like. I wish we had done those 4D ultrasounds, but I guess it’ll be an even better surprise when we see you. 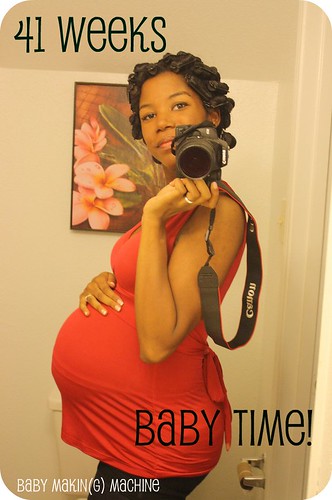 It’s funny thinking I’m going to have you forever and I didn’t really have a say in what you’re going to be like. See, with Snoop I got to pick him out of the bunch. I picked a calm, cute puppy. With you, well… You chose us! I guess that says something. It probably means we’re in for it!

If I had to guess what you’d be like I’d guess you’ll come out with squinty eyes, like mine, though I would love it if they were big and round like your daddy’s. I kinda hope they are grey because then you have a chance of them staying light-colored and maybe having blue eyes like him!

I think you’re going to have lots of dark curly hair. At least I hope you do! Your daddy and I both had lots of curly hair when we were born. His was read though. I don’t think your hair will be red. That would be crazy!

I think you’ll be pretty chubby since you’ve had so much extra time to bake. Your daddy was over 10 pounds at birth and I was well over 7 pounds and I was quite early. The doctor hasn’t made any guesses but if I were to guess I’d say you’re going to be about 8lbs 5oz. That’s my guess but we’ll see. I think you’ll be long too… Maybe 22in.

I don’t think you’re going to cry a ton when you’re born, though I kind of hope you do. I hope you like me when you see me. I hope you are a good eater. I really hope you wiggle as much as you do inside me now.

In fact, I’m sure you’re ready to come out cause last night you were wiggling SO MUCH. I’m not sure how you have room to wiggle but I’m sure you were trying to bust out of this joint. I even caught you on video!

Last night your dad and I were so excited we could hardly go to sleep. I told him I felt like I was waiting for Christmas and he said “yea me too!” We’re both so anxious and excited to meet you. We were actually kinda bored last night.. Something I’m sure we won’t be feeling for a long time!!

Please come here safely little one! I can’t believe the next letter I write to you you’ll be OUT HERE! In the world!

I’m so excited to spend the rest of my life with you little one. We’re in for an adventure!

Love you so much little Spawnie!

That is so cool! I never got my babies moving around inside the womb. Your little girl is gonna get such a kick out of that video some day! I can’t wait to see what she looks like either! P.S. You look cute in curlers. Why can’t I? **laugh**

Awww…Cute belly dance! Been thinking of you today and know you’re getting pretty excited! Happy Babymooning :0)

Awww! I’m so excited for you!! I can’t wait to see pictures and hear about it.

You look so cute! I am sure you guys will have a beautiful little girl. Maybe you can use some of the hairstyles we do as well 🙂

Yippee!!! I can’t wait to hear all about the induction and see pictures!

That video is amazing! We can’t wait to meet her too! I hope it all goes exactly as you wish!

You look so cute! I love the video. I got one of Gage moving around like that. It’s so cool! Though, I don’t think he was moving quite as much as Lil’J! Can’t wait to see her. She’ll be the most beautiful thing you’ve ever seen. Good luck!

So excited for you! Good luck tomorrow!

Been following from a far! Congrats and best wishes to you and your family!!!

I can’t believe it’s time!! Well I know you are ready. LOL! I hope everything goes well for you!

You look so cute in that picture! I check up on your status every day to see if the baby’s come yet….:)

First off, how beautiful are you! Goodness!
Second, I love the rollers!
Third, the belly dance is precious. It looks like you have a puppy under your shirt with how much she is moving!

I can’t wait to hear how everything goes..have a great 4th!

I’ve been checking in every day…I think all of us who read your blog are so excited to finally meet this little person. I can hardly stand it!

Everything will go great!!! Congratulations.

I think you should get the growth of your belly pics framed with a final picture of her in your arms. It would make a wonderful edition to her room. Good luck to you and hubby! So exciting! There really is nothing like seeing your baby for the first time. Best labor wishes to you!

Keeping you in my thoughts and prayers! Hoping all goes well and safe. Can’t wait to hear the news and see the photos! God bless!

Your blog has been such an inspiration. We are still TTC and I have much joy in seeing your little one moving around. I’m so excited and can’t wait to see her! Have a great birth!!

I have been reading this blog since before you were pg and I can’t believe its baby time already! 🙂 That video is amazing and made me say OUCH outloud LOL. I can’t wait to “meet” her and hear whatever it is you decide to share with us about her birth. Remember to ENJOY it and try and get someone to videotape the 1st moments — you forget the little details so quickly! Best of luck!

Girl you look fab! Perfect the preparation for the birth. I love your style.

Lil J. we cannot wait to meet you! We already love you! The 4th is your day!

Please everyone, pray for me so that I can become mummy soon. I really feel ready to experience this beautiful journey called motherhood!

Lil J., please, bring me luck of motherhood :)! Thank you!

Awww….isn’t that the best feeling in the world?! By the way, you look beautiful! We’re all waiting for you, precious little bean!!

This is so amazing. Can’t believe that the time has finally come. It’s been so awesome to follow your journey to motherhood. Can’t wait to see what happens once Lil J is here. Keeping you and your family in my prayers that God will continue to bless all of you and that J will have a safe and healthy arrival!

Best wishes for you, your husband and Ms. J tomorrow.

*sigh* exciting, not exiting. Don’t let the baby use your laptop to play on pbskids or your c key will no longer work, LOL.

I haven’t been over to visit in awhile and was shocked to hear that Spawnie had not arrived yet! I’m scheduled for a c-section myself on 7-7 so it looks like we’ll be having babies close together. Best of luck with everyone, I know your little girl will be gorgeous!

Good luck to you, your husband and your spawnie! I hope your labour goes smoothly, I can tell you for having experienced it twice myself, that nothing can prepare you for the overwhelming amount of joy and love you will feel when you see your baby for the first time!

You’re so gorgeous! Can’t wait to hear the good news. I have four of my babies induced with no problems – all healthy, all beautiful. Can’t wait to “meet” Spawnie.

Eek! I’m so excited for you. You will do great! Prayers sent to your growing family.

p.s. you still look beautiful in your rollers!

Yah! The time has come. Wishing you a safe delivery. Excited to see your little biracial 🙂

I really have loved reading these letters that you write to your little girl. I think that is just the sweetest thing. She will surely cherish them when she is grown!!!

Also, I think it is HILARIOUS that your toilet paper roll is empty in your belly picture!!! Been having to pee much? 😀

Oh my goodness You are so darn cute!!!! I love it! Can’t wait to meet/see your beautiful new angel!!!

You look wonderful! And this post MAY have made my eyes water a little… I’m such a sap these days.

Many blessings to you.

Congratulations on your beautiful baby girl!! Such a cutie!!

I should have thought of that! What a wonderful video to share with you little girl one day. It’s pretty amazing that our kids will grow up in this world where whole blogs are dedicated to them. Hope they like it 🙂

If you need ANY help with breastfeeding, call or tweet at ANY time!

P.s your out of toilet paper! Lol.

Love the video. My daughter never moved around enough for me to get a video. She seemed to “know” when she was being watched and would stop moving. LOL. The funny thing is she’s still like that now. As soon as the camera comes out she stops doing whatever cute thing she’s doing.

Hey, the great thing about not going into spontaneous labor is that you get that “last” belly shot. That’s one of my pregnancy regrets.

Can’t wait to see pictures of our precious baby girl. And I can’t wait to learn her name!

Oh yay! She will be here and you will be in for it!!! LOL! JUST KIDDING! Enjoy her…they grow fast! I were just beginning journey #2 to mommyhood….so your a finishing your mine has just begun!! 🙂

stop by when you have a chance: http://www.lilhiccups.com

Oh! I love the film of her moving in your belly! I loved to feel my babies wriggle, I still miss it and my “baby” turned 4 a coupla weeks ago! Seeing it, from momma’s perspective like that, made me all nostalgic, I swear I could almost feel it!!

I have never seen a tummy move so much!!!! Wow. This is such an exciting video to cherish forever….she was definitely ready to come out!!!