I’m trying to plan an awesome birthday party for my soon-to-be 3-year-old. Some of my friends tell me their almost-3-year-olds have given then all of the details of where they want their party to be, and what kind of theme. Lil’ J was like that before her third birthday. She wanted a Rapunzel-themed party at the bouncy place. Perfect!

My little guy isn’t quite as specific. For the longest time our conversation went like this:

Finally one day I was successful and got him to say something OTHER than the last thing I said and it was dinosaurs that won! Probably a good thing because last year,we did a train party. Oh my goodness, I’m terrible because I STILL haven’t shared all of the pictures and video, but maybe I’ll make it a goal to do that before his next birthday.

I get really excited when it comes to planning birthday parties, especially when my kid currently has something they’re really into and we can come up with a fun party theme.

I know what you’re thinking the PBS Show Dinosaur Train would be the perfect theme! But no, my son is obsessed with actual freight trains and scary dinosaurs. Not cartoon Thomas or colorful talking dinosaurs.

If we were to do a Dinosaur train party it would have to look something like this: 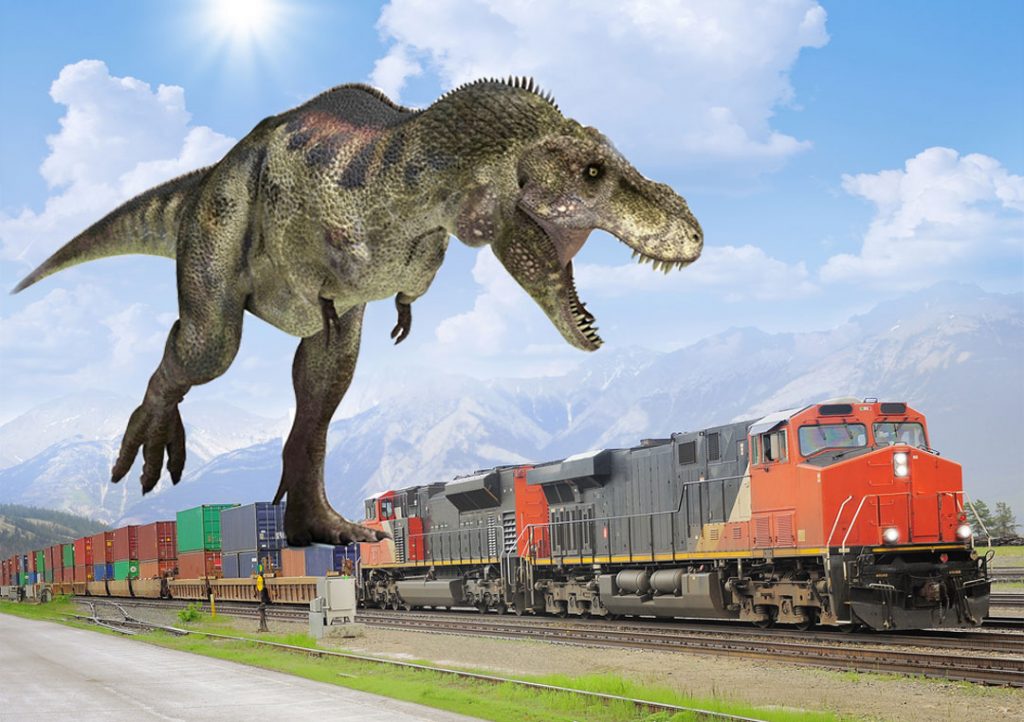 He hasn’t seen Jurassic World (exactly) but he has seen the last 3 minutes of the two big dinosaurs duking it out at the end of the movie. He watches it on YouTube over and over. If I try to bring up any kind of happy, friendly singing/dancing dino on YouTube Kids, he wants nothing to do with it.

He’d much rather me queue up a 45 minutes of freight train home videos. He likes actual trains and actual dinosaurs.

So right now I’m thinking making just getting Jurassic World party decorations, maybe printing off a few pictures of trains, hosting it at one of his favorite places to play and call it a day. It’s really a miracle I’m even thinking about it this early. Normally I like to procrastinate.

Have you done a dino-themed party before? Any tips for making one with realistic dinosaurs without the potential terror?

My son’s third birthday party was dinosaur themed, and I went with Dinosaur Train decorations (what I could find) and just improvised with the rest. The thing that was the most fun about his party was the sprinkler in our back yard. I told all of the parents to bring swim suits (his birthday is the end of August) and after cake, they ran the sugar off under the sprinklers. He honestly didn’t even notice all of the decorations and favors I’d pulled together.

And I just went back to look at my photos – I forgot about the chocolate dinosaur pops I made! They were awesome, and were our party favors.
http://lovejaime.com/simple-fun-dinosaur-birthday-party/

i think that sounds like a great idea considering you already did a train party….ps im a procrastinator too, my sons birthday is in the middle of march and still havent got a clue of what im going to do, lol. cant wait to see what you come up with 🙂

My sis did the cutest thing, she made these mini pom poms and glued them onto tiny party hats and put them on the dinosaur figures around the table. They were realistic and adorable!

Buying some Jurassic World decorations sounds like a winner to me. Maybe, you even get a dino pinata and smoking volcano to add in the mix? I saw this one party where the mom set up a temporary sand box and it filled it with fake dino fossils. The kid that found the most got a special prize.

My little guy is crazy about trains as well. Thankfully, he loves Thomas & Friends and we’ll be using that as the theme of his birthday party this year. I’m excited that he even wants a party because last year he wasn’t the least bit interested.

You were totally right I was going to suggest Dinosaur Train haha! My daughter loves that show. The dino part sounds great! I love the ideas the above comment mentioned.