I was taking an Uber ride to the airport with two women I’d just met. We were talking about international travel when I mentioned visiting Israel a few months ago.

“You went to Israel?” The driver pipped up. He hadn’t said much during the trip. “How did you like it?”

He had an accent but I couldn’t quite peg it.

“I loved it!” I proclaimed. “It was so beautiful, and the people were very friendly.”

“That is my country!” He told us proudly.

We proceeded to chat about Israel for the remainder of the drive. About all of the amazing food, sights and innovations. The differences in culture, and how Saturdays are so quiet in observance of Shabbat. Our driver hasn’t lived in the states for long. “Only a few years,” he told me. He misses Israel and wishes he could go back more often.

It’s been a few months since I flew around to the other side of the world on my first international trip to visit Israel. This random conversation with our Uber driver unexpectedly took me back. As I described all the good things I ate and the amazing things I saw, I was a little surprised I remembered so much. 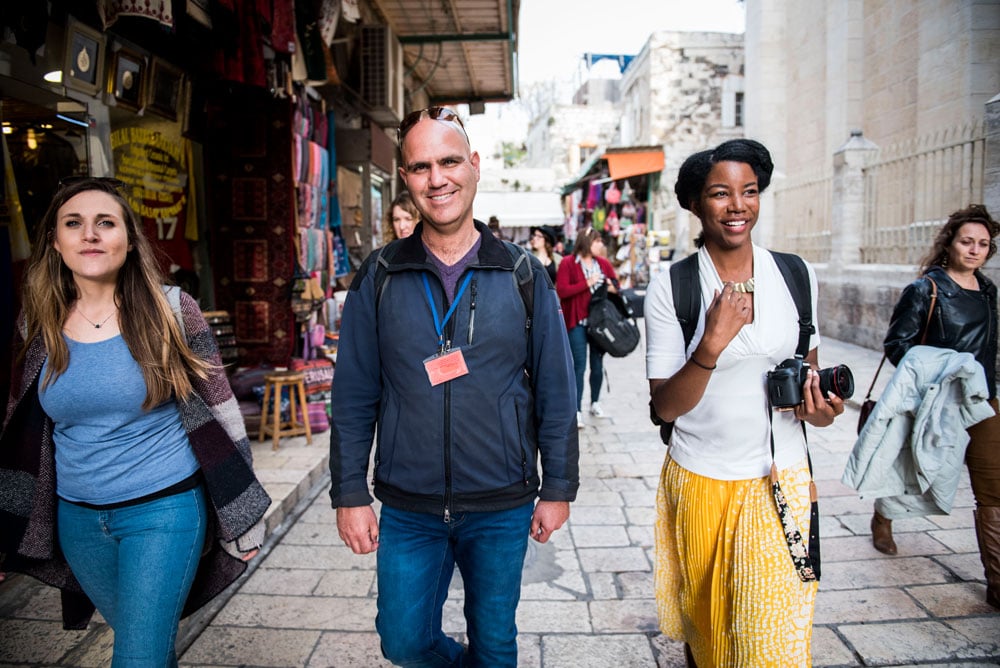 There are so many things I’ll never forget about that small but mighty country. It was an unbelievable experience that I’m still pinching myself about. Sometimes I’ll re-watch my vlogs, or scroll through my bath of photos just to make sure it really happened. From the plethora of cute (yet rabid) stray cats, to Tal’s incredible art studio, an inspiring children’s museum… It’s hard to narrow down my favorite parts.

I took a ton of pictures while we were there but we also had the honor of meeting Shani Sadicario, an incredible Israeli photographer who was able to do what I don’t do enough… Get me in front of the lens. She took most of the photos in this blog post.

Before my memories begin to fade I wanted to jot down 10 memorable experiences I hope I’ll never forget about Israel and share some of the moments we captured while there. 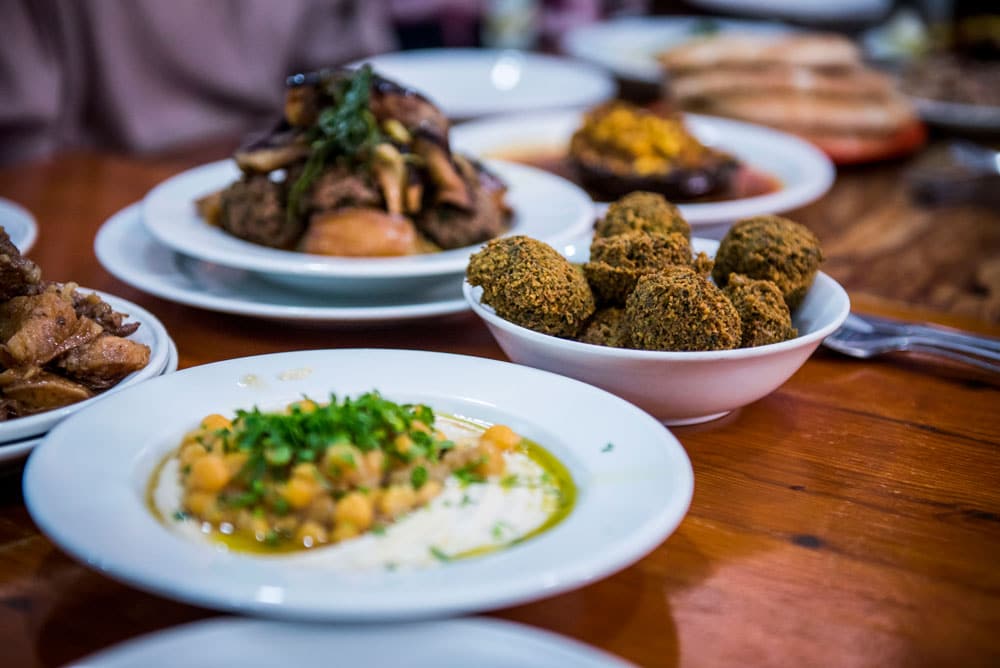 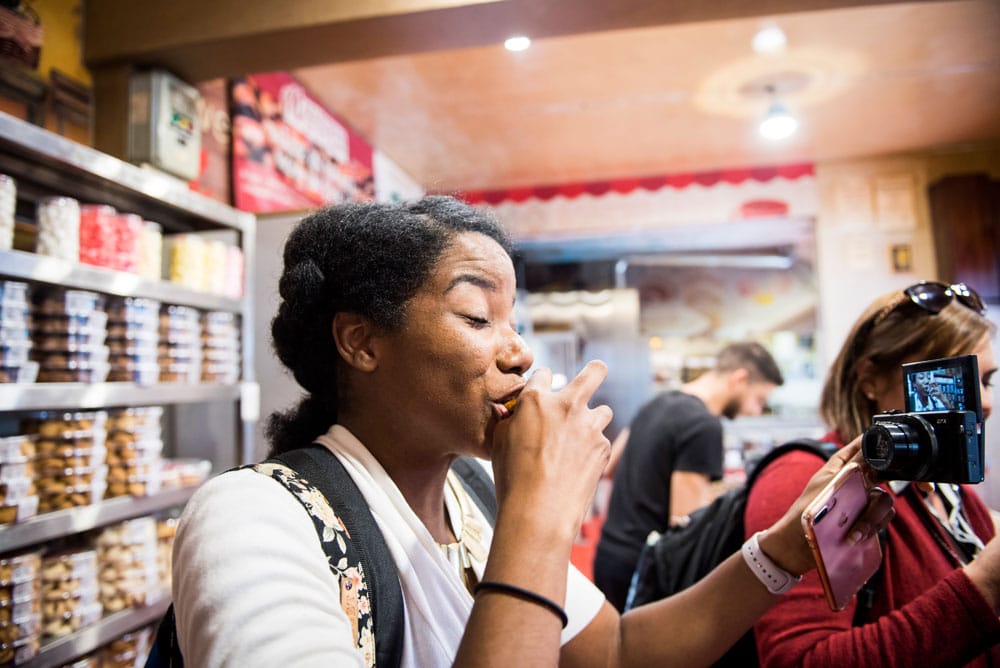 I don’t like to call myself a picky eater, but I can be particular. There are a lot of foods I don’t really like: Onion, corn, ginger-based stuff. So when you’re eating in another country for the first time there’s a good chance you won’t like everything. I liked EVERYTHING! We had so much food. For breakfast, lunch, dinner, and deserts at almost every meal. It’s hard to say what my favorite was. I loved everything with potato and all the delicious breads. I walked away with a handful of recipes that I need to make again so I can bring that delicious taste into my home. 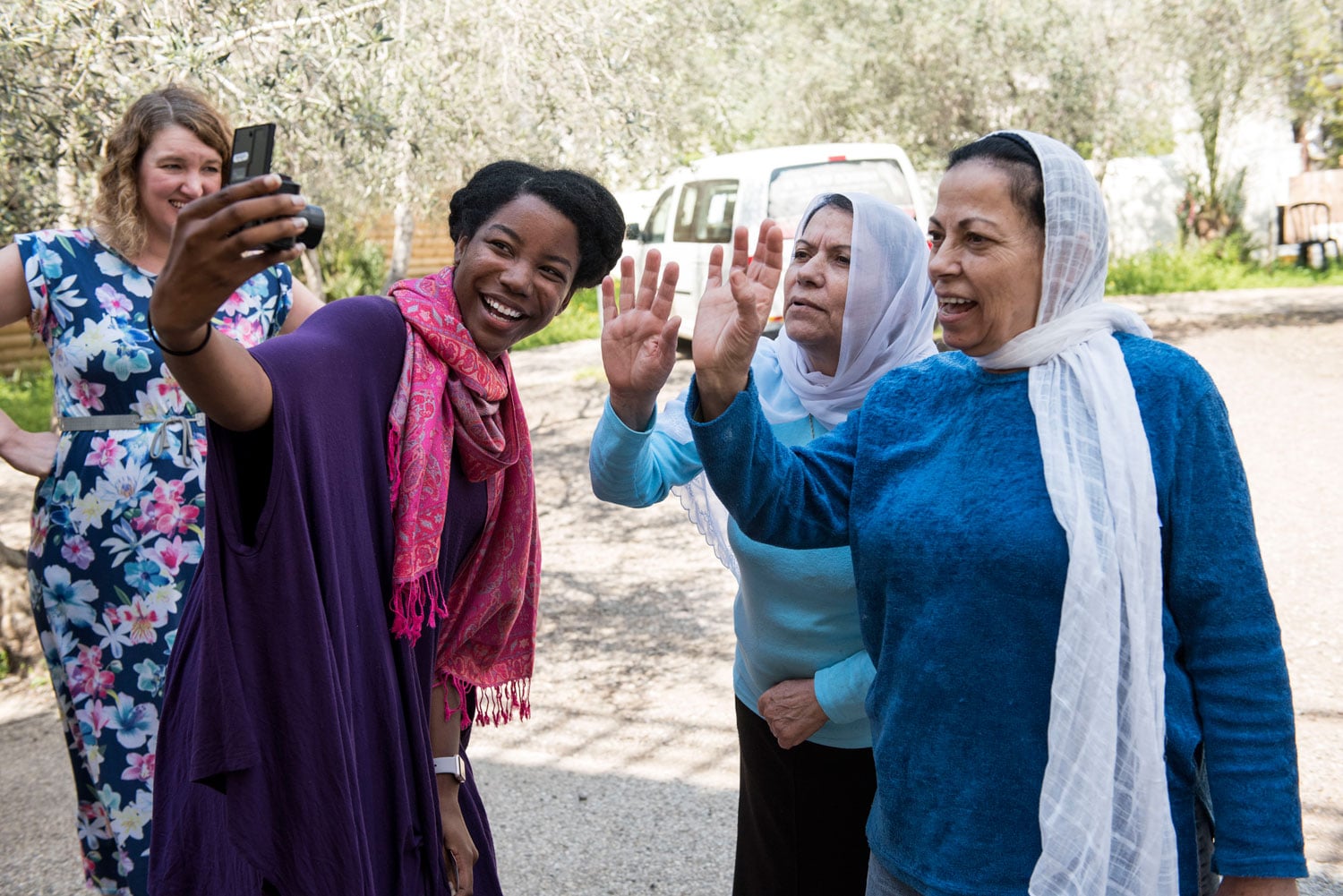 One of the most fascinating parts of the trip was traveling to a Druze village and meeting some of the women from the small Arabic-speaking ethnic group. We met Nurah Husaysi and her sisters who taught us how to make easy yet scrumptious food. We had our own little personal cooking class then got to sit down and listen to her share more about their community.–How the women are in charge, and the men are tasked with keeping their women happy. Seeing this little splice of Israel was a further testament of how much of a melting pot it is. 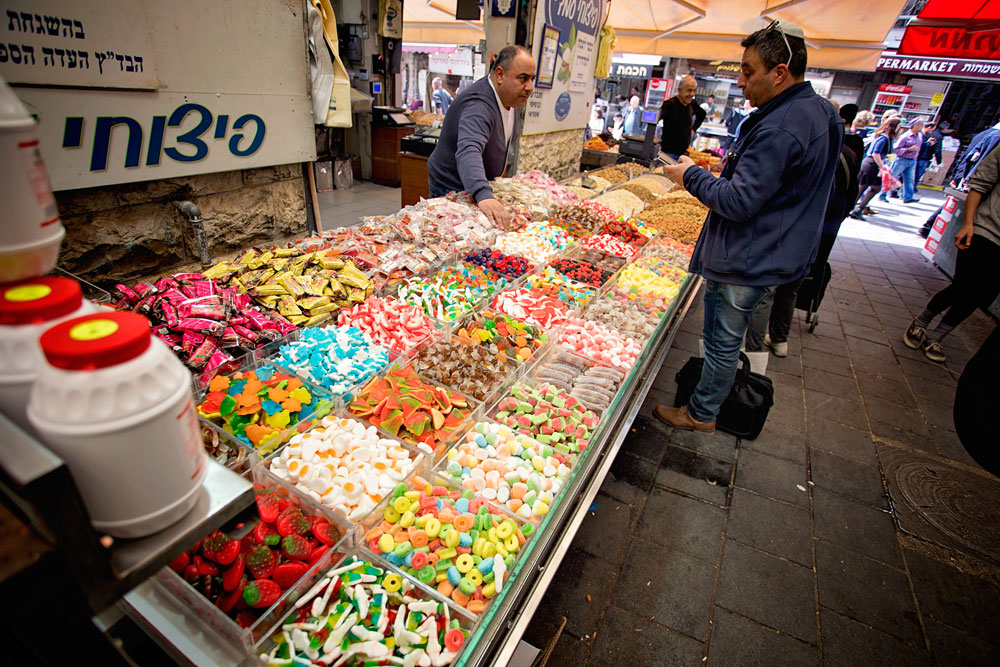 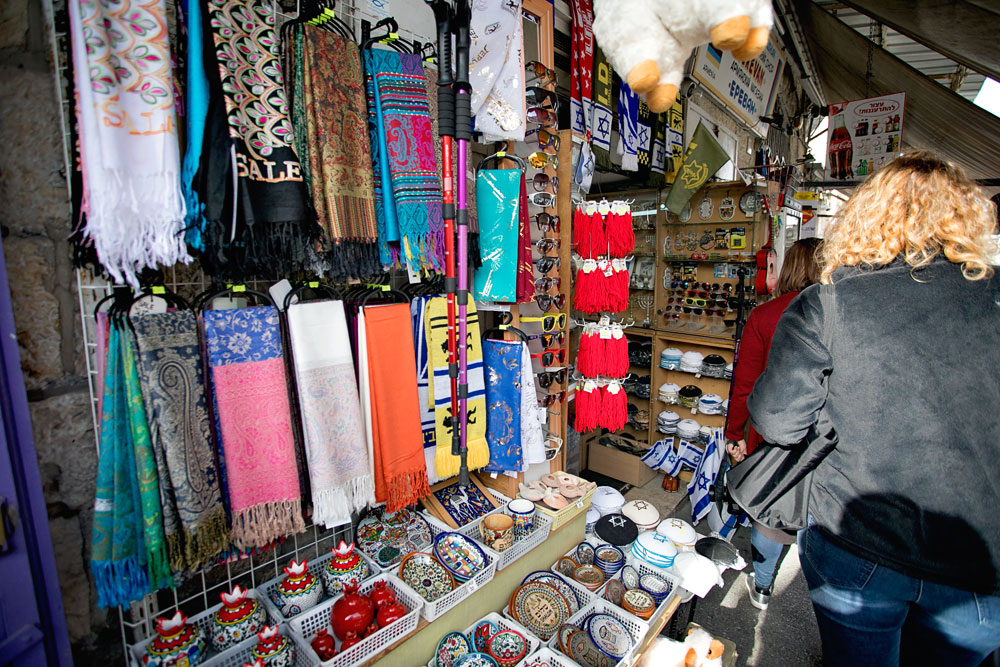 Street markets are iconic and I’d never really had the experience of going to one until this trip. Everyone tells you to bargain but not really how. And when you’re negotiating in a different currency things can get confusing. But the streets were so colorful. The atmosphere was exciting and the samples were aplenty.

I have a thing for candy bars, and there were beautiful colorful candy buffets all over.

4. The women and Vibe of Israel 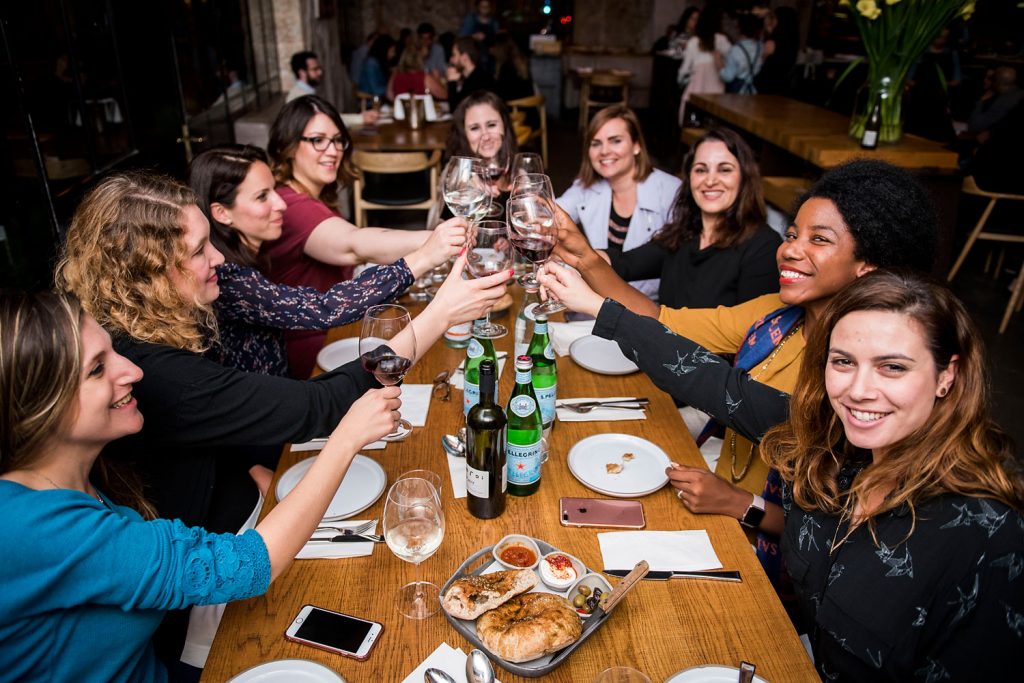 Girl power to the max. From the Druze community to the women running the nonprofit Vibe Israel, and other ladies all over the country running nonprofits, writing for magazines, presenting at art shows, doing the news, playing sports, all while wifing and moming etc. Who runs the world? Girls! Indeed. 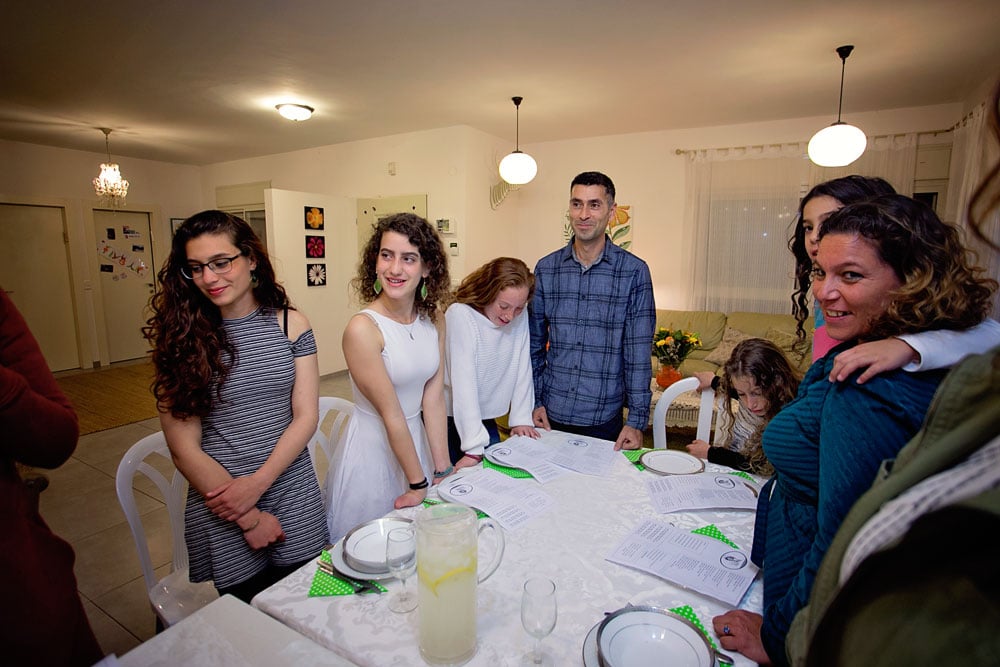 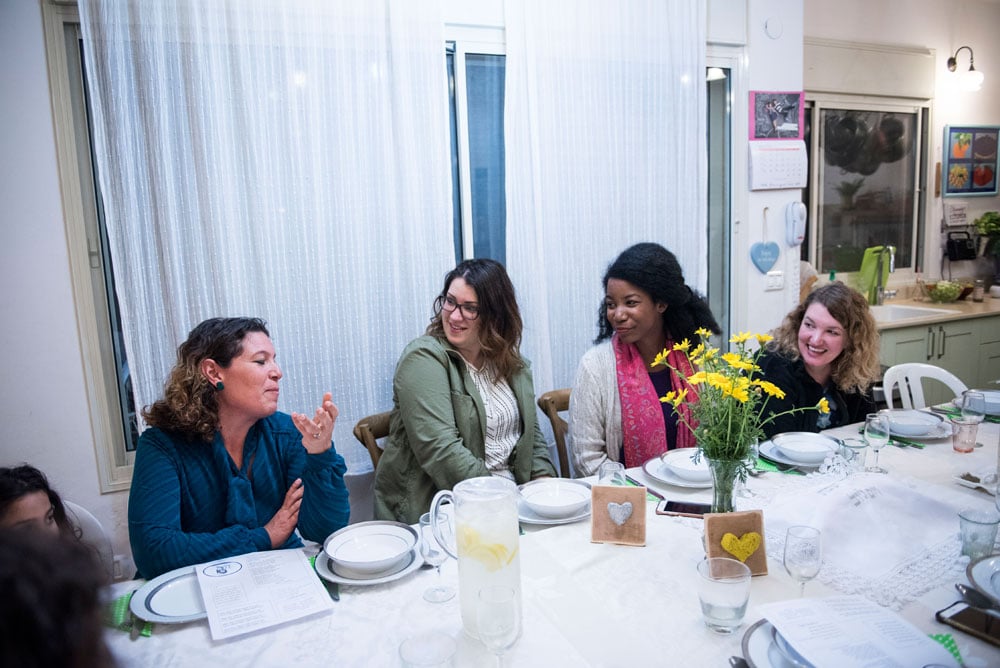 The average family size is bigger in Israel and it’s evident families are a priority there. We ate a Shabbat dinner with a beautiful family and sang songs, passed plates of delicious food, and shared stories. It’s powerful to think that so many families carry on this tradition every week. I mentioned before that in Mormon culture there’s a traditional weekly event called Family Home Evening. Though it doesn’t have the same religious meaning, it reminded me of how important a weekly family gathering can be. 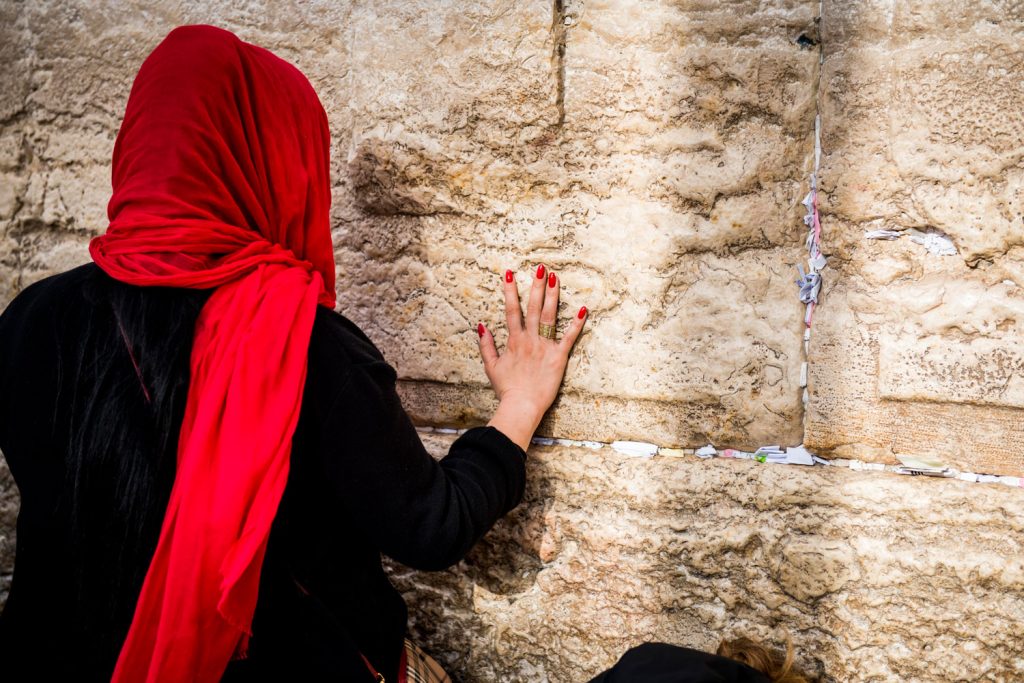 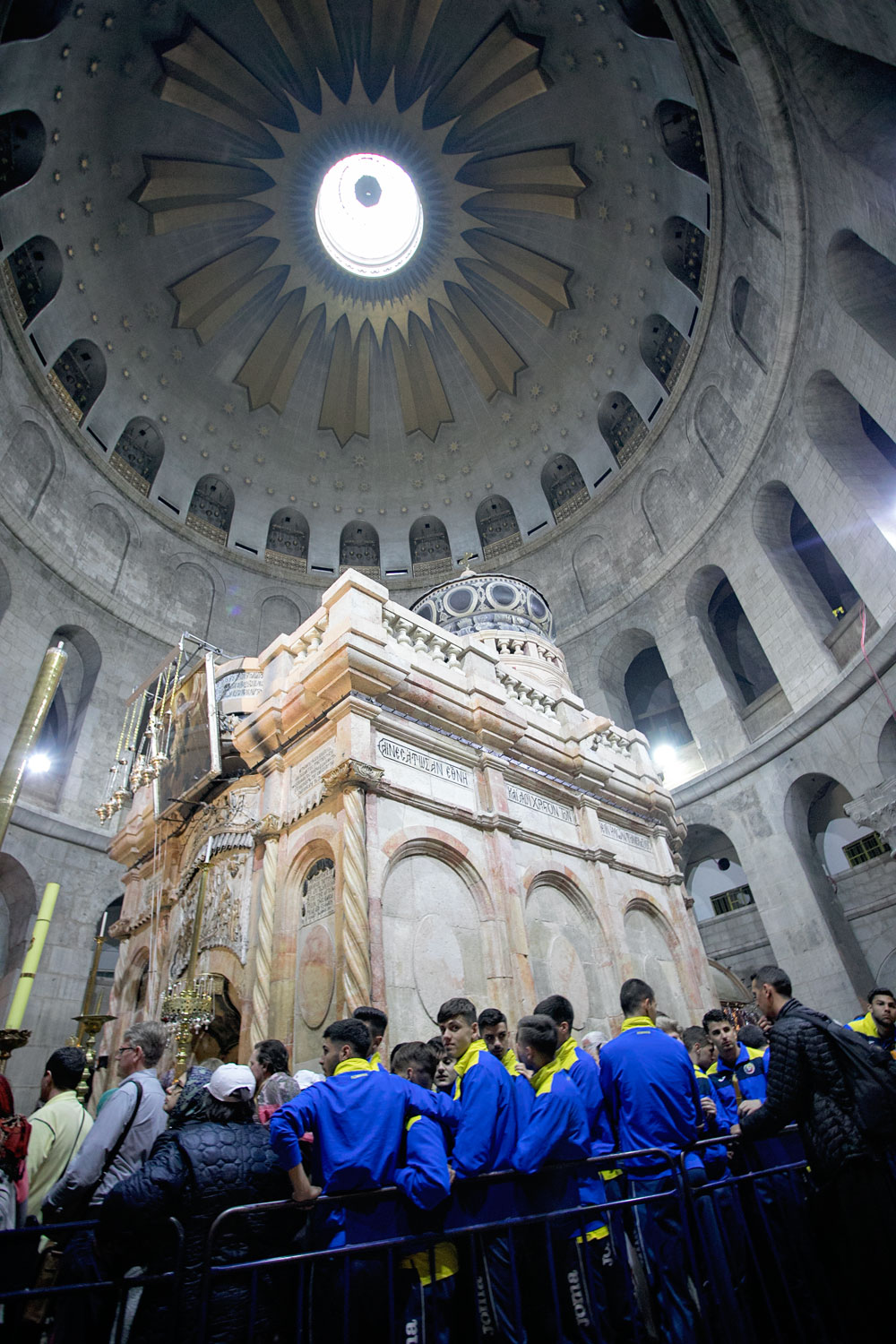 Jerusalem is a holy land for three of the worlds largest religions. In one direction people prayed against the Western Wall, in another there’s the Dome of the Rock–An islamic shrine, and then up on the hill is the Mount of Olives, and in the same area is the Church of the Holy Sepulcher that marks Christ’s crucifixion, death and resurrection. My church even has a Jerusalem Center built there. Everyone wants a piece of the holy land.

7. These kids, and the people who help them 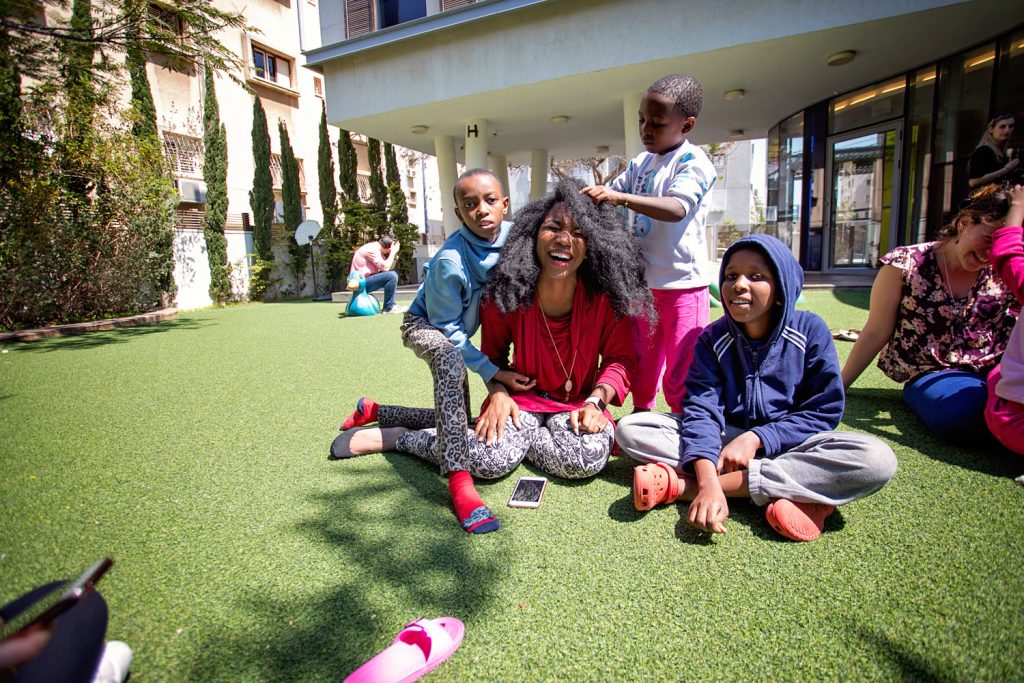 “We mend hearts, regardless of race, religion, gender or nationality.”

I spent a day meeting children with congenital heart defects and talking with some of the people working to help them. Save a Child’s Heart is an international nonprofit based in Israel. They bring children from around the world–Mostly African countries to fix their little hearts. The best part is the also train doctors from all over the world to learn these special skills, so they can return to their homelands and help children children there. 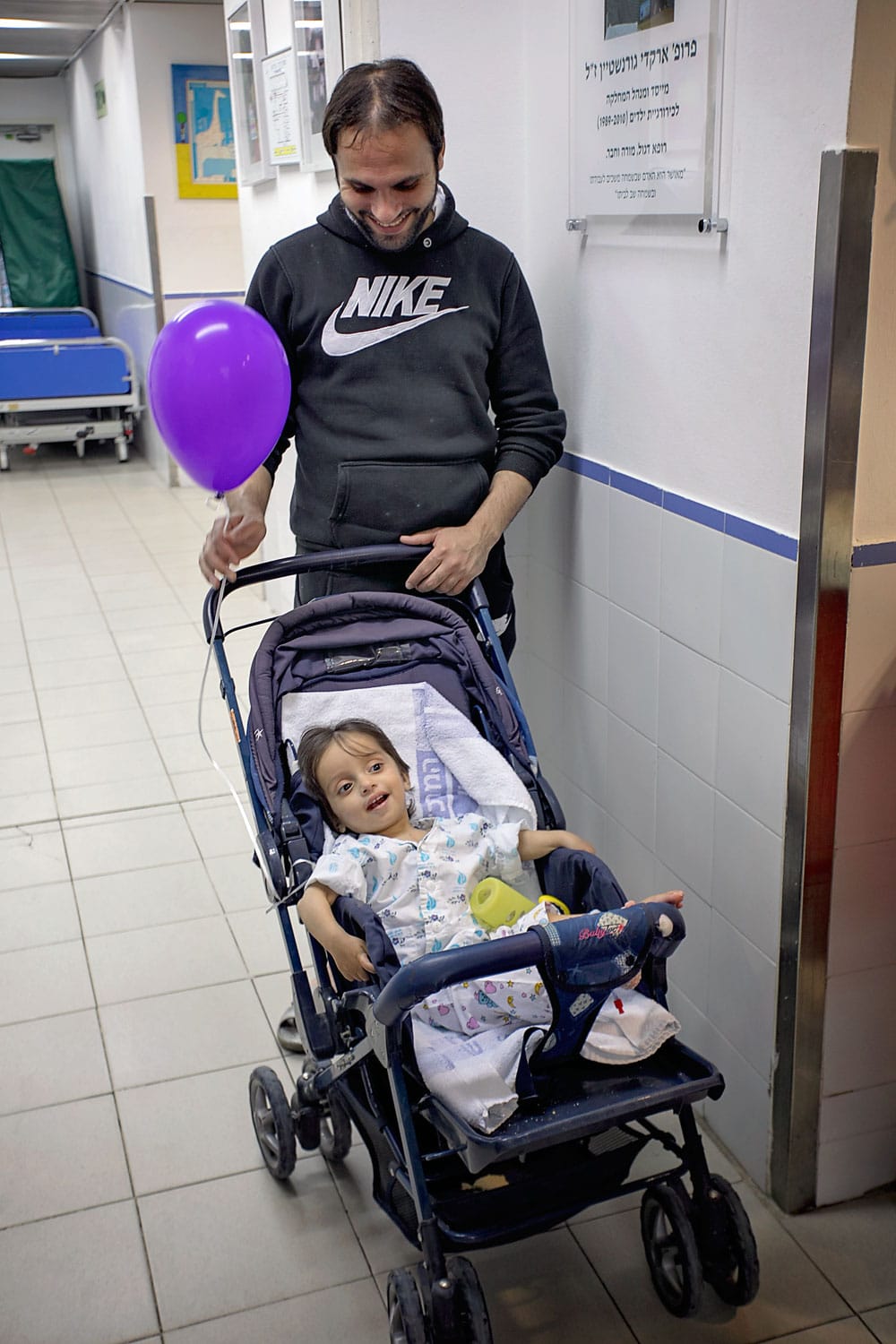 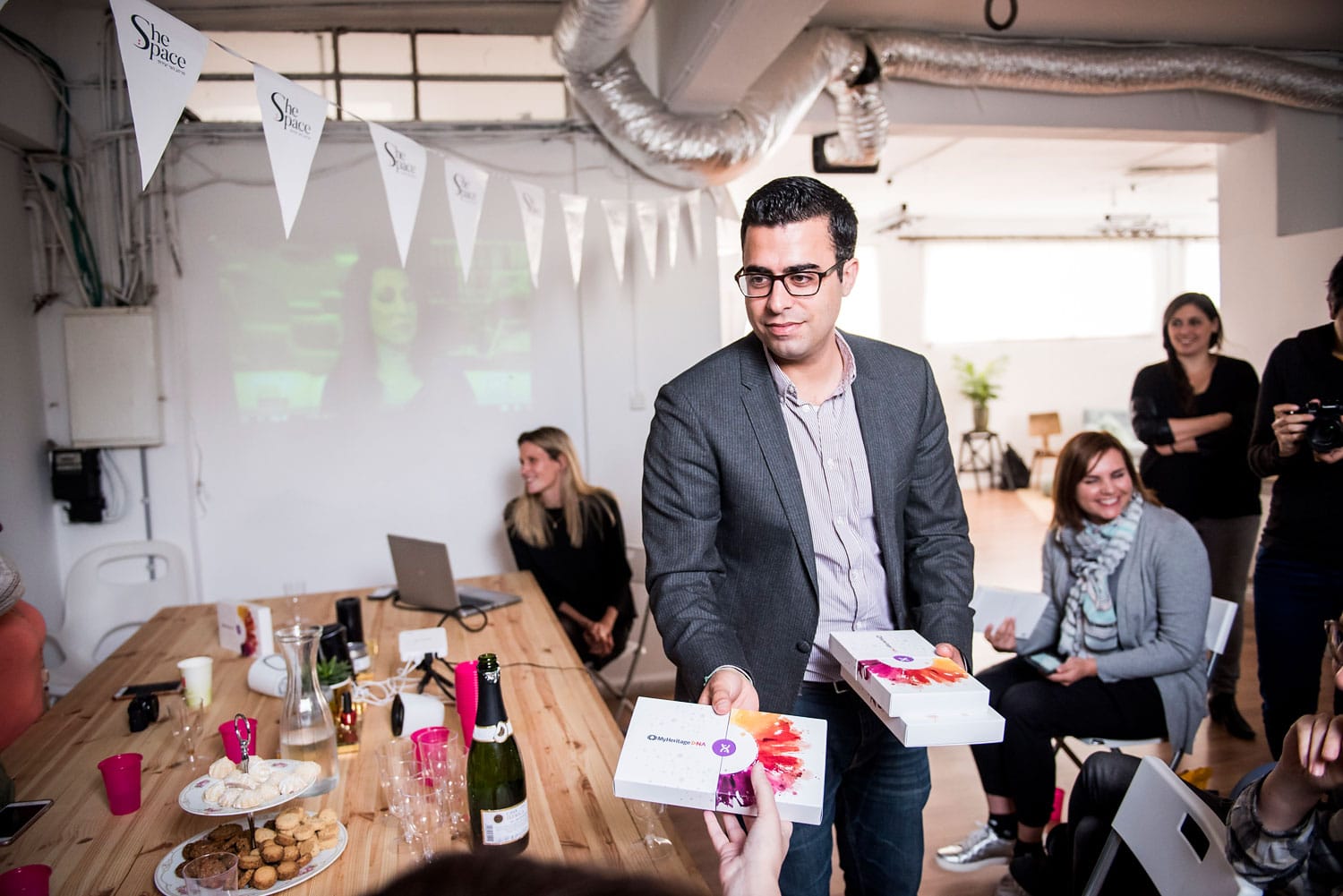 Israel is nicknamed the startup nation not just because the new country itself was formed and started less than a century ago, but because there are a huge amount of startup businesses kicking off there. We got to meet innovators from a handful of them. One I know you’ll love knowing about is MyHeritage DNA. MyHeritage DNA testing is all the rage right now. I did my first test a year ago and I was excited to try MyHeritage DNA as well since they can show me more details about my background. My husband and I both did the test. We got our results but I haven’t opened them just yet. Yes, the suspense is killing me. We did a vlog taking the test and I am going to record us reading the results, so stay tuned for that review. 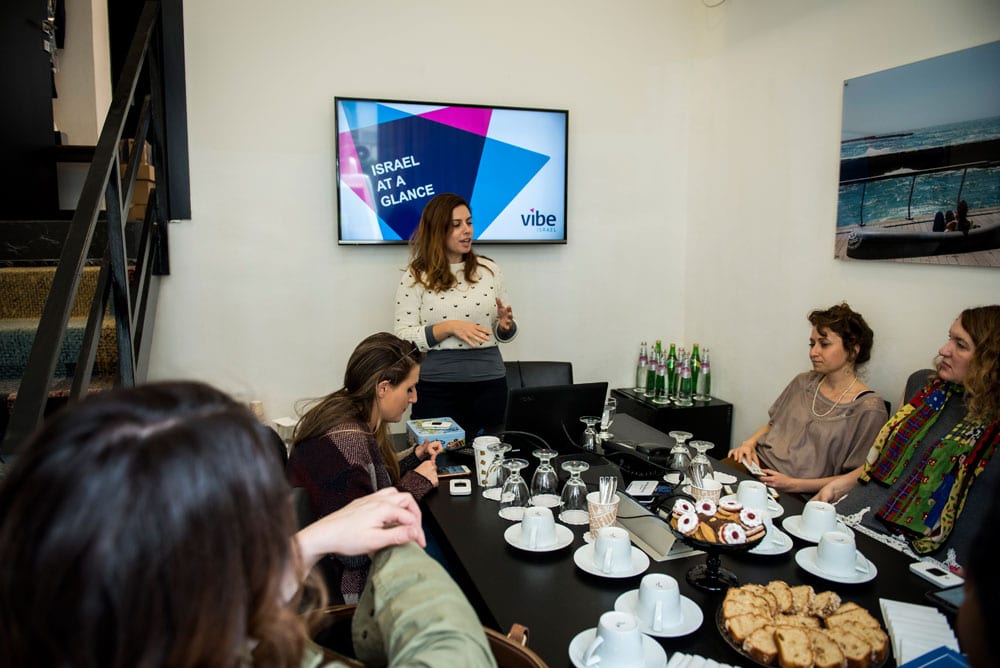 The “can do, take no crap” unapologetic attitude many Israelis put out was inspiring. They don’t spend time complaining about issues they, people look to problem-solve and make things better. If nothing else this is what made me feel at home. I’m extremely optimistic and hate feeling trapped within a problem. There’s some comfort in knowing there’s an entire country of people who feel this way. 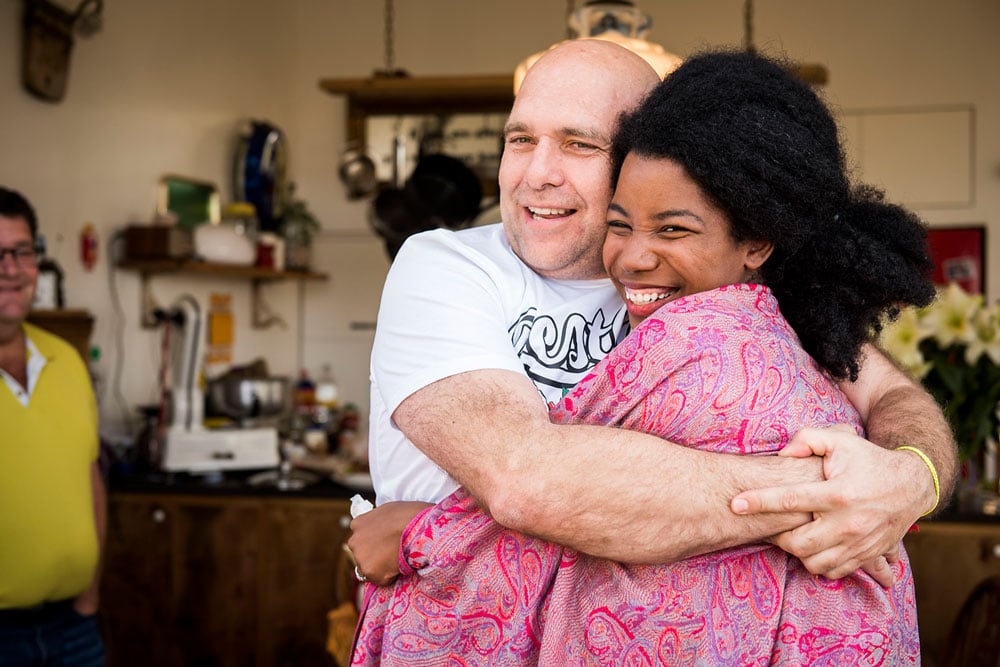 Before I left for Israel friends encouraged me to be careful, and worried we’d be in danger. My husband was even a little worried when I first decided to go. Aside from everyone speaking Hebrew, it felt a lot like visiting a different part of the states.  I didn’t expect a foreign country to feel so much like home.  After visiting and experiencing it with my own eyes it seems a lot like our country. Stuck with a leader many people don’t agree with, dealing with difficult issues not unlike any other country. A young progressive community trying to create positive change. And families trying to make the best possible future for their kids. I can definitely attest to the fact that you shouldn’t believe everything you see on TV because you’re only getting a tiny part of the picture. Usually the part meant to alarm you. 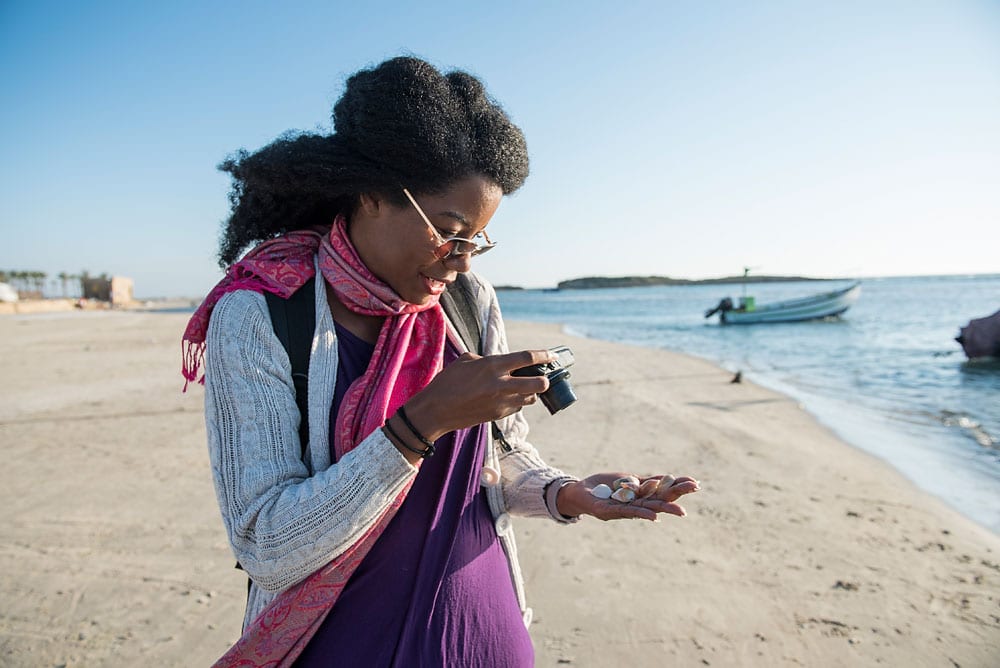 As I’ve continued to travel for work throughout the year I keep running into people who are Jewish, from Israel, or have been to Israel and I almost always get the same reactions of surprise and delight when I tell someone I’ve been there. Israel was my first stop abroad and it will always have a special place in my heart. I absolutely can’t wait to visit again some day, but next time I’ll bring something that will make my trip 1000% more special… My family.

You can watch all of my travel vlogs from Israel on my Youtube Channel.

I’ve been a reader of your blog for many years and this post makes me so happy. I am an Orthodox Jew and reading about you having a glimpse into our world left me with a smile on my face all the way through. Thank you for sharing your photos and experiences.

Awww, thank you Chana. I’m so glad you enjoyed it! Your people are so remarkable!

Thank you encouraging me and information about Israel.