How fast can you move in 10.5 seconds? Can you set up a camera while holding a wiggly baby, run to your pinpointed position, and pose with your child before the timer goes off? I gave it a shot yeserday.

Since I’m getting into photography, want to get better and want to connect with other photo hobbiest I finally upgraded my Flickr account to pro, joined a couple groups, and even added a nifty widget to my sidebar.

When I was browsing around in one of my groups I noticed this gorgeous photo of a mother and daughter. She also has a biracial daughter and I just loved their faces side by side and the contrast reminded me of my daughter and I. I noticed in her description she said it was a self portrait-Waa? And that she had cropped her remote out of the shot. She was also linked up to the group “Self-Portrait with CHILD.”

Despite having a pretty expensive camera, my husband can’t seem to snap a decent picture with it. I frequently ask him if he’ll take a picture of Lil’ J and I and he’ll sigh, but he’ll do it. But it’s almost always blurry. After about 10 times of saying “Ok now this time try it this way…” he gets really annoyed and no one is really happy at that point. He’s ready to go watch sports, Lil’ J is tired of us and our silly faces, and I’m just so darn picky and aggravated that he’s not getting it right. So I thought trying to capture a self-portrait wouldn’t be such a bad idea.

Now I don’t have a tripod for my camera, which this woman had. I also don’t have a remote. But I have a nifty self timer button, and can run REALLY fast.

There’s a spot in our neighborhood I love to go to take pictures. It’s a wide open area with lots of trees and green grass. The ground isn’t level so I thought I could set my camera up high, then run down the hill, fix my hair, pose with Lil’ J, and have the camera snap just in time.

When we got across the street I noticed a fallen tree was slumped at the top of the hill, so I decided to improvise used that as my tripod. I laid our quilt down, put my daughter on it, framed the shot toward her, then made a mental note of how much space I had. I set the timer for 10 seconds (it was that or two seconds) and ran.

The first photo wasn’t so bad but my head was cut off. I realized this was a lot of energy for one photo at a time, so I changed the setting to snap 5 pictures in a row. Ran, and did it again.  After doing that a few times I had gotten a couple of good shots but not quite what I was hoping for. The first three photos I’d be setting up the pose and the last two were somewhat decent but not enough to choose from. So I changed the setting to snap 10 photos in a row and went at it again. Now I was getting somewhere. 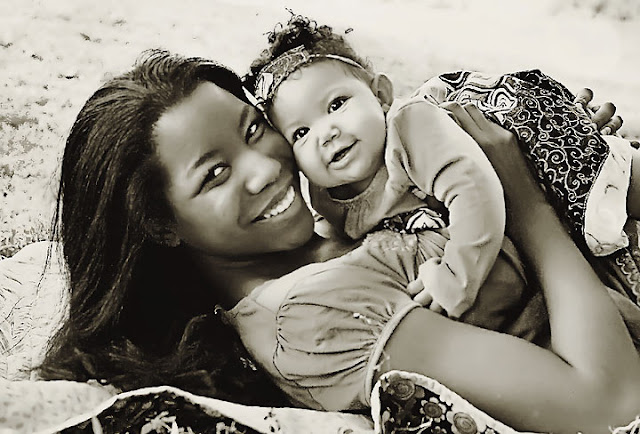 The funny thing was Lil’ J liked the sound the camera made when it was rapid firing she would look at it and laugh, which made for a great photo.

After running back and forth a few more times, and surely confusing my poor child I was stoked when I saw my last shot, and I knew it was time to stop. I got it!


I showed it to my husband and he was impressed, but then when I showed him the picture that inspired me he said “Oh so you copied it?” No! Ok, well sorta, I copied the pose, but that’s not illegal! Besides, I was limited by height because I don’t have a tripod. And who is he to judge me anyway? 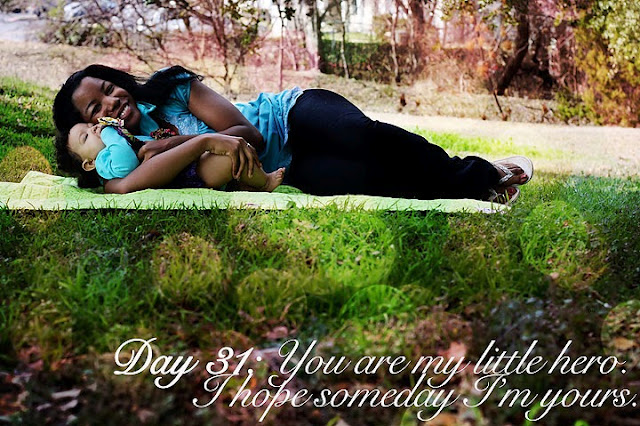 My photos aren’t as cute as the original one that inspired me but I’m working on it! I uploaded it to that flicker group and I’m going to try some more of these as long as the weather stays warm, Lil’ J cooperates and I can come up with different pose ideas. Taking pictures is becoming my new favorite thing to do on my day off. I just ordered a wireless camera remote for my camera for $3.50 off ebay so that should save me from running back and forth (even though the exercise is warranted). Lil’ J loves playing outside and I love the memories, so it’s a all good all around.

Self-portraits are a neat little photo challenge, especially with a baby, and aside from our shoot before her baby blessing, these are some of the best photos of us together. Figures. You want something done right you’ve gotta do it yourself!

Those photos are adorable. You’ve inspired me to take pics with my lil guy in the park.

Cute picture!i hate to say it you did all of the hard work (pregnancy/labor) but Lil’ J looks just like her daddy!! LOL She is so cute but she’s a daddy’s girl.

OMG I love them! Now I’m trying to figure out how I can do it!

Those are beautiful! You’re doing great! I also love photography (and dh laid out money for a really good camera) but I just haven’t had the dedication to keep practicing. Keep it up! (Plus- you have an adorable model!)

WOW! Those are beautiful photos!! The first photo is my favorite of the two. You and Lil J are so beautiful! GREAT work girl!!

It turned out amazing! You two are so beautiful together. I love the scenery, too.

love it!!! the pics are really good, definitely impressed!

I love this picture of ya’ll! I wanna do that now! hmmmmm wonder if my wiggily 9month old will do this!

Oh my goodness, I wish I could take pictures like that, but they are so cute! I love them.

You and lil J look so beautiful!

The weather did NOT stay warm. But bonus, you make get to take a photo of her in the snow later this week.

I think your pics turned out great. We are saving for a DSLR camera before Bun arrives. I can’t wait to learn all about it.

i love it! these pictures are awesome! i’m going to have to try!!

Okay..totally not copied! Your pictures look way different except for the fact that you’re laying on the ground which doesn’t even count!

I bet with a remote you’re also not going to look so silly runny back and forth! I would laugh if I saw someone doing it, but in a good way haha

Aww…how cute. I’m constantly jealous of all the great pics you capture of J because Moo like your typical toddler refuses to sit still long enough for me and her to do any decent candid photos. She’ll say cheese and then dart off just as the camera snaps and all I’m left with is a blur.

I’m hoping that this will change once the new baby comes. I’ll be able to snap lots of photos are being still because she’ll be right where he is watching ever so closely for the slightest movement I’m sure.

How have I not thought of this before? I was just thinking to myself the other day that although I’m really looking forward to upgrading my camera, and I’m having fun learning more about taking better pictures, it would be even better if my guy would learn along with me. I have a mini-tripod for my point and shoot camera called a Gorilla Pod — assuming they have a larger version that works with DSLRS, you might like it as it’s much more portable than most other tripods I’ve seen, even for small P&S cameras. I’ve used it for group shots quite often, but I’ve never thought about using it for a self portrait — that’s a great idea! Now I don’t have to worry about missing out on nice self-taken pics of me and future kids if my husband decides not to invest in improving his picture taking skills 😉

Aww, I haven’t been on here in a long time. You and your daughter are adorable!

I think your photo came out great! Good job!

This is such a beautiful photo of you & your daughter!

Okay. I have NO IDEA why, but this made me teary. And also totally inspired to try this myself–my husband is also lacking the photography gene (I didn’t know it was possible to take a bad picture with the cameras we have… but it is! haha).